How to Use MsgBox and InputBox in VBA Excel

If you practice regularly, developing UserForms isn’t difficult. But using the built-in functions of Excel VBA to perform the same thing is easier. There are two functions MsgBox and InputBox in VBA in Excel. These two functions help us to display simple dialog boxes without creating UserForms in the VBA Editor. We can customize these dialog boxes, but for sure they will not provide all the options we can perform using a UserForm. In this article, we’ll talk about MsgBox and InputBox in VBA in Excel.

You may download the following Excel workbook for better understanding and practice yourself.

As the name implies, we can easily display an InputBox to the viewers and request responses from them using the VBA InputBox() function. Particularly, this is useful for obtaining a single input from the user.

This function returns an InputBox with some kind of criteria.

The syntax of this function is as follows:

The arguments are defined as follows.

Now, we’ll show some examples to make it clear. So, let’s explore them one by one.

In our first example, we’ll learn how we can get multiple inputs from users using InputBox. So, let’s follow it.

Here, we want to get the username and password in cells C5 and C6. To do this, 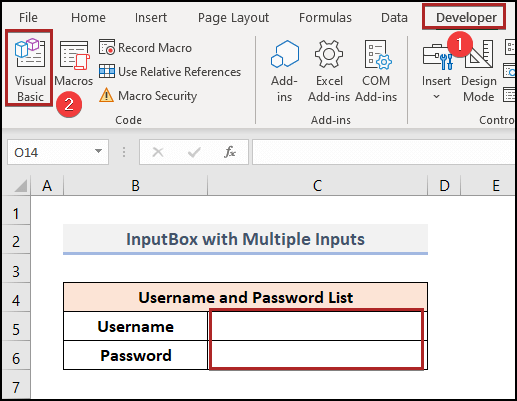 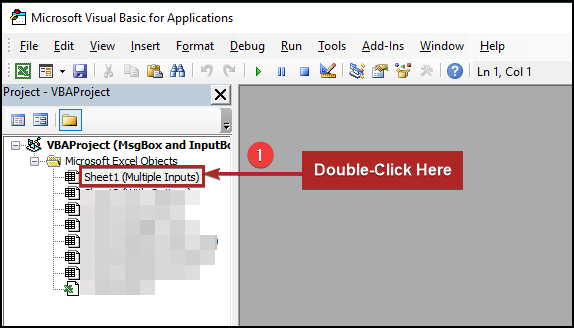 Thus, it opens the code module. 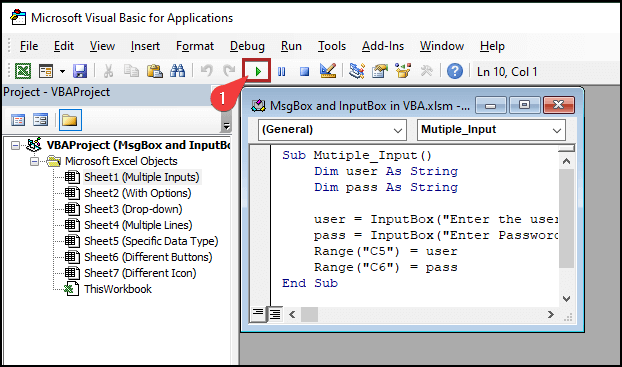 After pressing the Run icon, the code gets to execute itself. Instantly, an InputBox appears before us. The title of this dialog box is Exceldemy as we set it in the code. 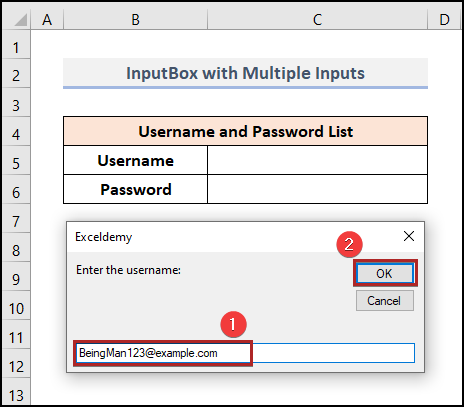 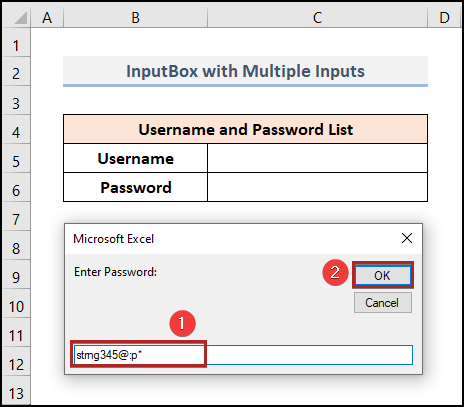 Currently, we can see the inputs acquired in the places in cells in the C5:C6 range.

Now we’ll create an InputBox that can show multiple options to the users. From the available options, the user can choose their desired one and write it down in the blank box. Here, we’ve to input the name of the student and his corresponding grade in cells B5 and C5.

For this purpose, we’ll use InputBox with options. So, without further delay, let’s dive in! 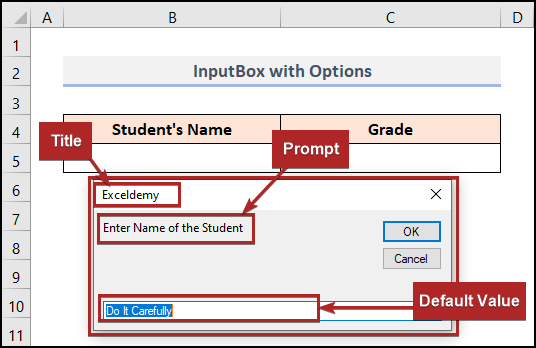 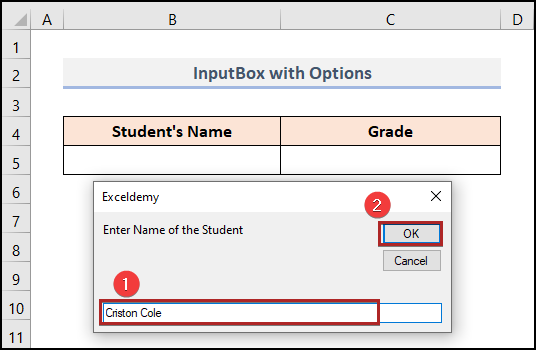 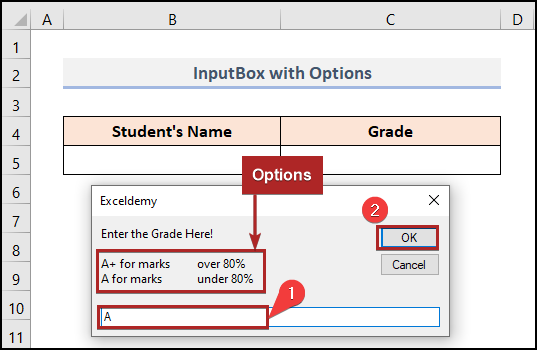 Currently, we’ll insert an InputBox with a drop-down list. Actually, it’s not an InputBox but looks like it. It can get input from users. Here, we got some names of the Class. 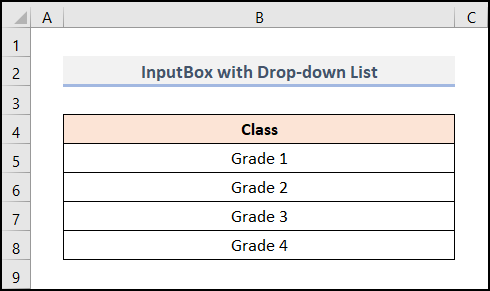 From this, we’ll create a box that can get input from a drop-down list of these class names. To do this, we’ll use Combo Box. Let’s see it in action. 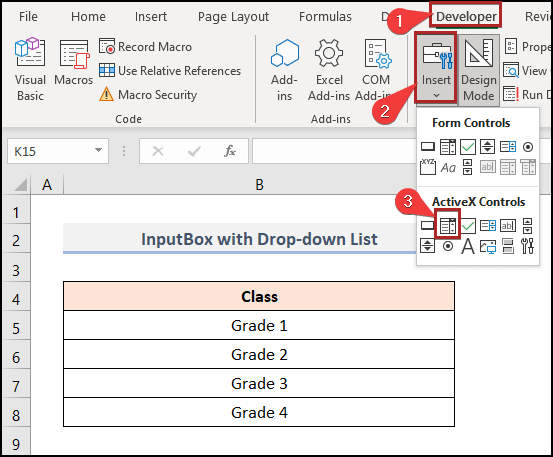 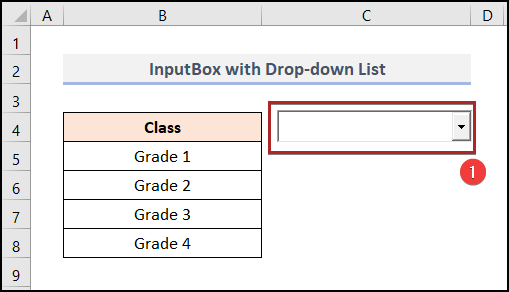 Immediately, it gets us to the Microsoft Visual Basic for Applications window. Also, a code module was created for this Combo Box automatically. 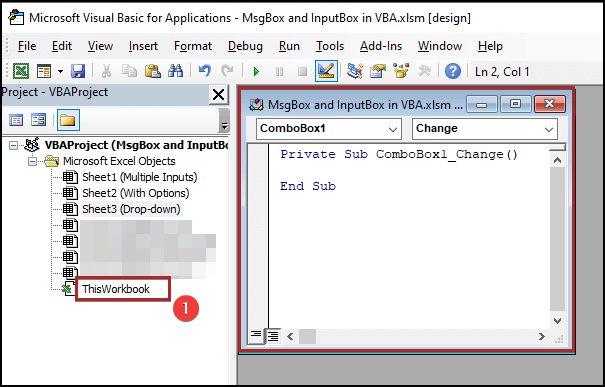 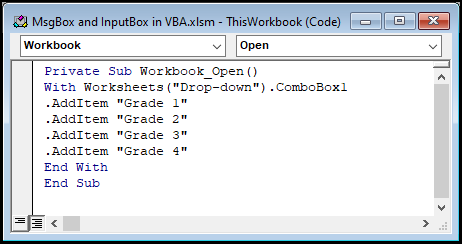 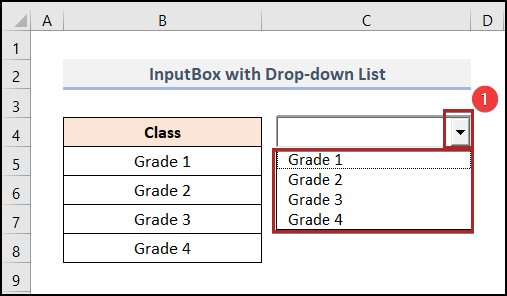 Here, you can select any of the four options from the drop-down list.

You also can use the Application.InputBox method to do the same task. But it has some advantages over the InputBox function.

The objective of this method is also the same as the previous function. It also returns an InputBox with some advanced features.

The syntax for this method is kinda same as the InputBox function. It’s as follows.

The arguments of this method are mostly similar to the arguments of the InputBox function. Just there is an extra parameter here that is Type. It’s an optional argument. Actually, it defines the type of returned data. In the absence of this option, the InputBox will just return text as a default. Here is the list of the value of the data types.

Now, we are going to see some examples using this new method. Let’s explore them step by step.

In our first example of this method, we’ll learn how we can make an InputBox with multiple lines. Here, we’ll input the Student’s Name using an InputBox.

For this, we’ll use Application.InputBox method. Let’s go through the steps. 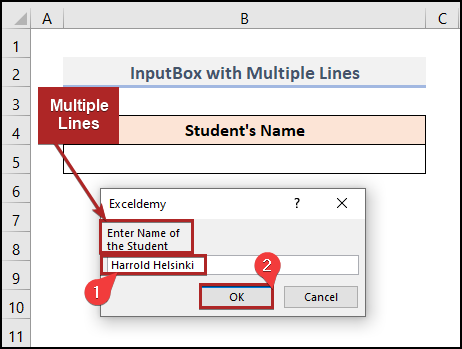 Immediately, it gets placed itself into cell B5.

Note: The fact to notice here is that we haven’t specified any data type in our code. So, as default, the InputBox takes the entry of a text string that we’ve addressed before.

In this example, we’ll use the Type argument of this method. At this time, we’ll get input of the score of a student through the InputBox.

So, look at the example very carefully to learn the use of data type. 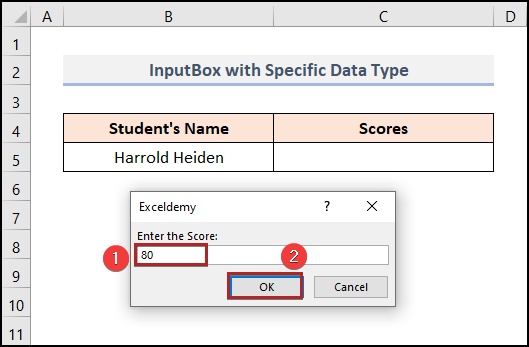 Presently, the score gets placed into cell C5.

But, what would happen if I didn’t enter a number? Let’s see this phenomenon. 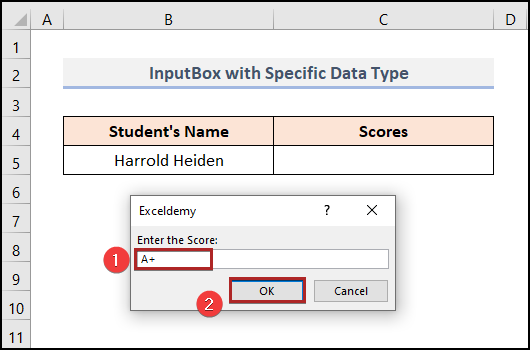 Instantly, it will show a warning box like in the following image. 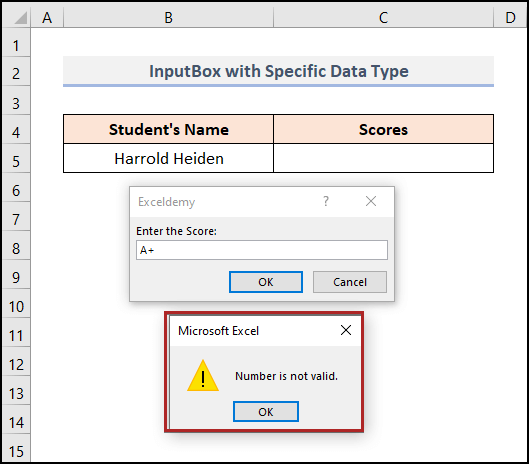 The MsgBox is an easy way to display information and to take simple input (like Yes, No, Cancel) from the users. It appears in the display as a pop-up. For example, we can say Hello through a MsgBox to our users. For this purpose, we’ll use the MsgBox() function.

MsgBox function can be used by itself like this one: MsgBox “Click OK to continue” (parenthesis not included in this way) or it can be assigned to a variable like the above one: Ans = MsgBox(“Process the monthly report?”, vbYesNo).

The MsgBox function shows a message in a dialog box, waits for the viewer to select a button, and then sends back an Integer number according to the clicked button.

A simplified version of the MsgBox syntax is as follows:

The arguments are defined as follows:

Just have a look at the following table to grasp the used constants in the MsgBox function.

In this example, we’ll show how to create a message box with different buttons. Follow the steps below.

Instantly, a MsgBox will appear on the display. 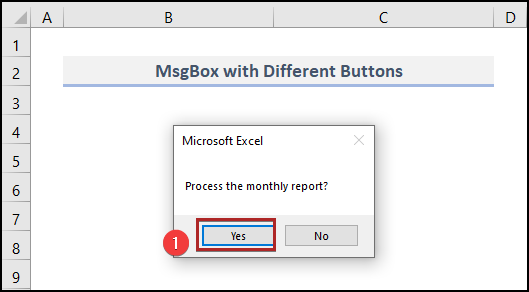 Immediately, it shows another MsgBox with some information. 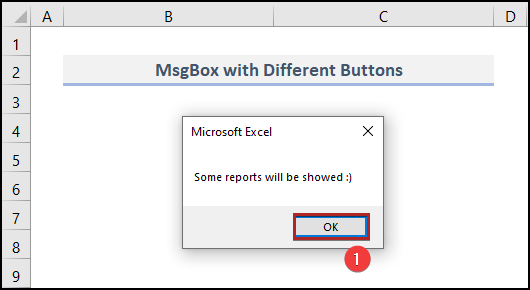 Now, we have used a combination of constants (vbYesNo, vbQuestion, and vbDefaultButton2) to show a dialog box with a Yes button, a No button, and a Question mark icon. The default button (vbDefaultButton2) will be the second button (No button). So, follow the example below.

After executing the code, we can see the MsgBox with a question mark. 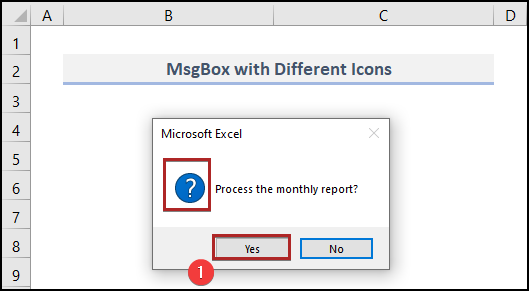 In the next step, we can see another Information icon on the prompt. 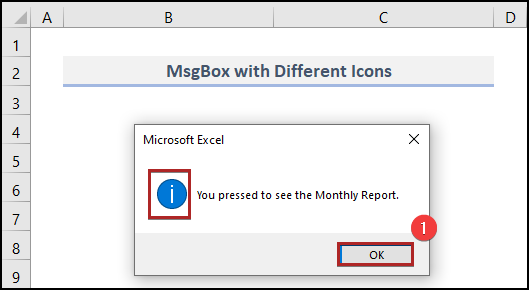 This article provides easy and brief solutions for MsgBox and InputBox of VBA in Excel. Now, you can easily use MsgBox and InputBox in VBA in your Excel file. Don’t forget to download the Practice file. Thank you for reading this article. We hope this was helpful. Please let us know in the comment section if you have any queries or suggestions. Please visit our website, Exceldemy to explore more. Anyway, happy Excelling! 🍵

How to Use Web Scraping with Excel VBA (3 Suitable Examples)

How to Generate Payroll in Excel VBA (with Easy Steps)

How to Force Recalculation with VBA in Excel