Recently, India introduced the GST system to replace some of its messy indirect tax systems. Since it is a relatively new concept, a detailed discussion on it will go a long way to make people aware of this new system. So, in this article, we will talk about the GST system and also provide a list of GST state code in Excel.

You can download the practice Excel Workbook from here.

Goods and Services Tax (GST) is an indirect tax on the provision of goods and services. It is a thorough, multistage, destination-based tax. It is thorough because it has replaced nearly all indirect taxes, with the exception of a few state taxes. Due to its multi-staged nature, the GST is levied at each stage of production. However, because it is a destination-based tax, rather than an origin-based tax like earlier ones, the government collects from the point of consumption rather than the place of origin.

What Is GST State Code?

The first two digits of the state code where the business entity is registered make up the GST number given to the taxpayer. The location of the company entity and where manufacturing is done is also indicated by the state code. As a result, it is the special code given by the GST law to each state in India. The government can categorize the registered taxpayers in each state using this code.

Why Do We Need GST State Code?

Short, numerical codes are advantageous since they help to avoid the confusion that results from writing an alphabetic GST state code in GST invoices and GST return data. Processing invoices, identifying the relevant GST liabilities, and submitting GST returns would all experience issues as a result. Similar to this, once taxpayers are aware of their jurisdiction, they can benefit much from transparency. They would be able to communicate their complaints to this jurisdictional officer, who would also be able to resolve any disputes regarding jurisdiction between the center and the state.

As we know it by now, according to the GST law, every state has a unique numeric code. It will be incorporated with the Goods and Service Tax Identification Number(GSTIN). This is a 15-digit code unique to every taxpayer. A sample GSTIN code is as follows,

We will break it down part by part in the following sections.

According to the Indian Census 2011, the first two digits stand for the state code. Each state has its own code. For example, the state code of Delhi is 07, whereas that of Punjab is 03.

The next ten digits (AAAAA0000A) will be the Permanent Account Number (PAN) of a taxpayer. A 10-digit unique identity alphanumeric number called a “Pan Card” is given to Indians, typically to those who pay taxes.

The 13th digit (in this case 1) denotes the taxpayer’s registration in the same state under the same PAN.

5 is the check code. The check code will be the last digit. It could be a letter or a number.

Here, we have applied cell formatting to highlight the cells , to make the code break down discernible.

According to the GST law, every state has a unique numeric two-digit code. Here is a list of all the states with their GST codes. We have used cell formatting to highlight the state codes. 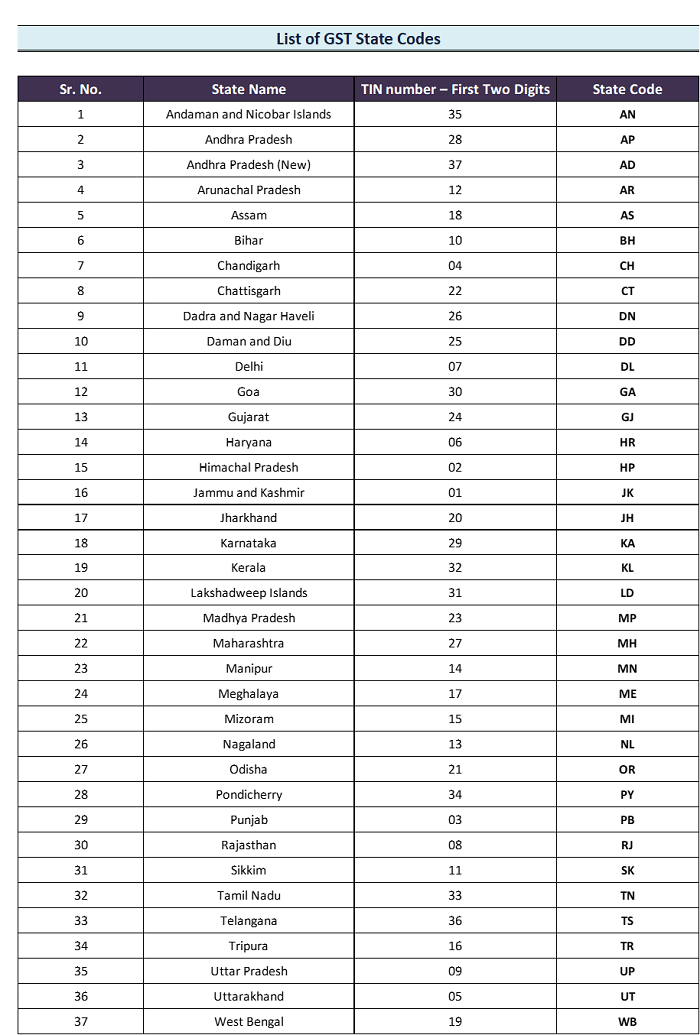 We used the Copy as Picture command to take this Excel snap of the GST state codes.

Read More: How to Calculate GST in Excel (With Easy Steps)

I am an engineering graduate. I graduated from Bangladesh University of Engineering and Technology(BUET), one of the top universities in Bangladesh from department of Naval Architecture & Marine Engineering with a major in structure. I am an avid reader of fiction especially fantasy. I also keep myself abreast of the recent developments in science and technology. I believe diligence will eventually pay off and luck tends to favor those who work hard.