In our previous articles, you have been introduced to Excel UserForms. In this chapter, I am going to discuss Excel Form Control Vs ActiveX Control.

Excel provides several ways for ensuring the input values meet specific criteria and Form Control is one of them. Actually, Form Controls are objects that are functional when the user needs to interact with the dataset. In order to get access to it, go to the Developer tab and then click the Insert option. You will see the Form Controls command.

Under the Form Controls option, there are several commands. The functionality of these commands is described below.

Read More: How to Use Form Controls in Excel

A user can use the ActiveX Controls on worksheet forms with or without the application of VBA code. Usually, ActiveX Control is used when a more flexible design is needed than Form Control.

The ActiveX Control has intensive properties that allow the user to customize behavior, appearance, fonts, and many other characteristics. However, it should be kept in mind that user is not allowed to add ActiveX Controls to chart sheets or to XLM macro sheets. The functionality of ActiveX Controls is described below.

Read more: How to Use ActiveX Controls in Excel

Why We Use Controls on a Worksheet?

The user can easily provide input values when the UserForm controls are used directly in the worksheet. For example, if you create a model that uses one or more input cells, you can use controls to allow the user to set or select values for the input cells.

For example, say I have inserted two OptionButton controls on a worksheet like the following figure.

Cell E6 and E8 are linked to two OptionButtons. 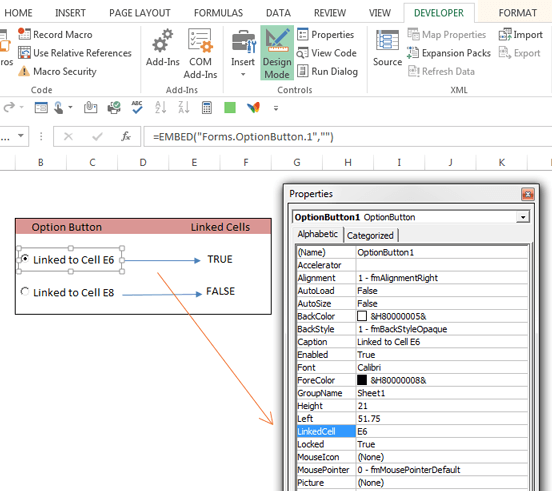 Link cells in the properties window when your Design Mode is activated.

When you use controls on a worksheet directly, the workbook becomes very interactive, but it uses no macros.

When you choose Developer ➪ Controls ➪ Insert to add controls to a worksheet, you will get two different sets of controls: Form Controls and ActiveX Controls. You may be confused about which one to use if you’re new.

The figure below shows the controls that display when you choose Developer ➪ Controls ➪ Insert. Move your mouse pointer over a control, Excel will display a ToolTip that describes the control. 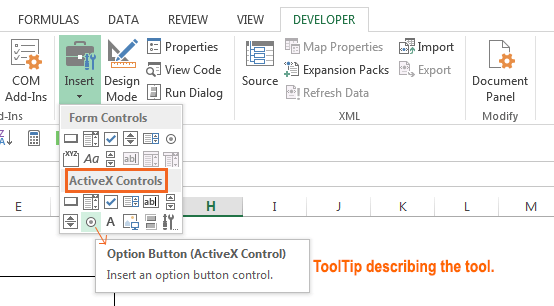 You may be more confused as many controls are available in both sources. For example, a control named ListBox has listed in Form Controls, and ActiveX Controls both. But remember, they’re two totally different controls. In general, Form controls are easier to use, but ActiveX Controls add more interactivity to a worksheet.

Excel Form Control and ActiveX Control are kinds of the same. The applications are quite the same but still, there are some differences between them.

In this article, I’ve tried to gather some ideas about Form Control and  ActiveX Control and the key differences (Form Control vs  ActiveX Control) between them. Hope this article has shed some light on your journey of learning. If you have any queries, don’t forget to share them in the comment box below. You can also visit our official website ExcelDemy to get more related articles. Thanks for keeping in touch.