How to Count Specific Names in Excel (3 Useful Methods)

While investigating large datasets in Excel, you might be required to count the number of cells containing a specific name. This article provides 3 simple methods on how to count specific names in Excel.

Let’s say we have a dataset that depicts the Employee ID, the Year, and lastly the Sales Person of the Year respectively. We’ll use the dataset (in B4:D14 cells) shown below for the first and second methods. 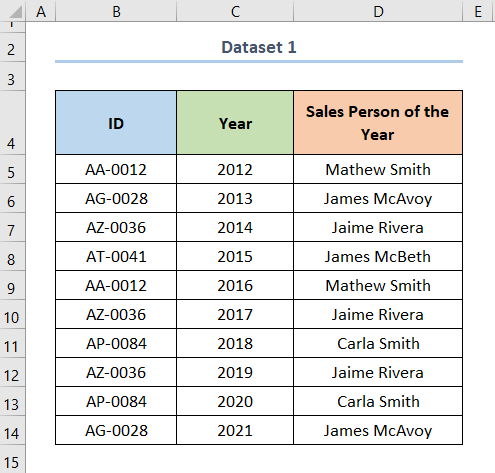 Luckily, you can count the occurrence of a name in a worksheet in many ways. Let’s explore the various methods and how to apply them.

To allow users to count any desired name instead of entering it directly into the formula, we have designated a cell to enter the name. For instance, the name is entered in the G4 cell. So, the formula in the G5 cell will be like the following. 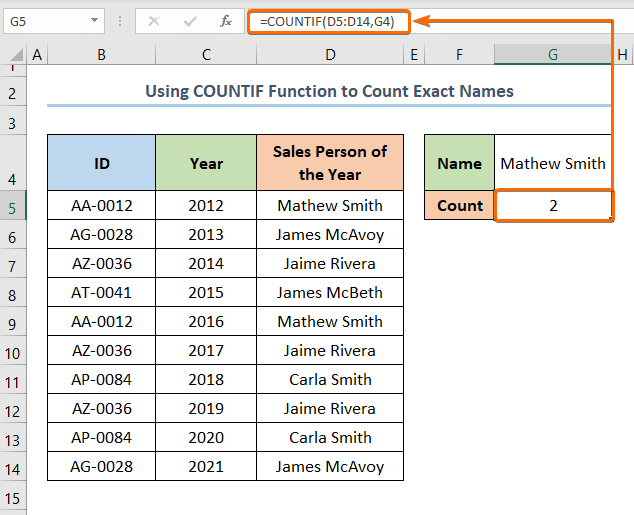 Read More: How to Count Words in Excel with Formula (2 Handy Examples)

The previous method matches the given criteria exactly. As a note, if at least one different character is present inside the cell, like, a space character then it will not be treated as an exact match. Simply put, the cell will not be counted.

To count the cells which contain other texts in addition to the specific name, we’ll use the Wildcard Character. Simply place an asterisk (*) character along with the cell reference. By varying the position of the asterisk character, we can count the name from the cells in the range. Let’s see it in action.

2.1 If Cell Contains Specific Name at the Start

If the specific word is at the start of the cell then we need to append the asterisk character after the cell reference, as illustrated in the example below.

Thus, the formula in the G5 cell will be as follows. 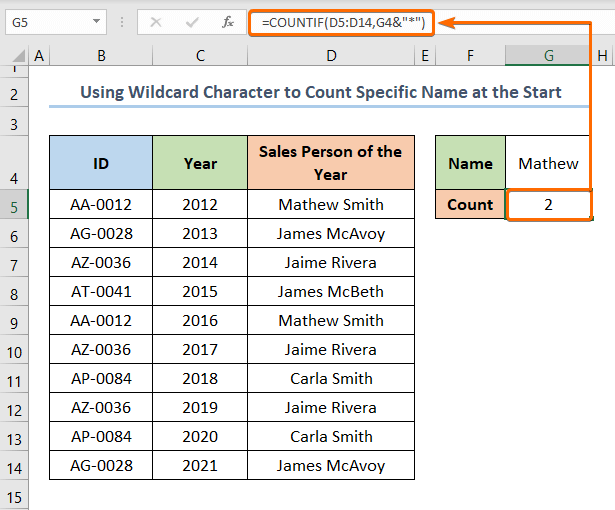 2.2 When the Particular Name Is in the Middle

In contrast, when the specific word is in the middle of the cell, we add the asterisk character both before and after the cell reference.

Subsequently, the formula for the G5 cell will be as follows. 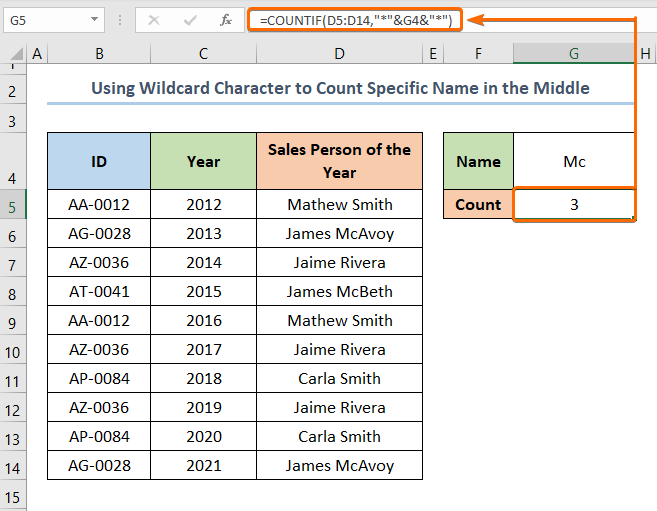 2.3 If the Specific Name Is at the End

Lastly, if the target name is located at the end of the cell, the asterisk character is concatenated before the cell reference which

Eventually, the formula for the G5 cell will be as follows. 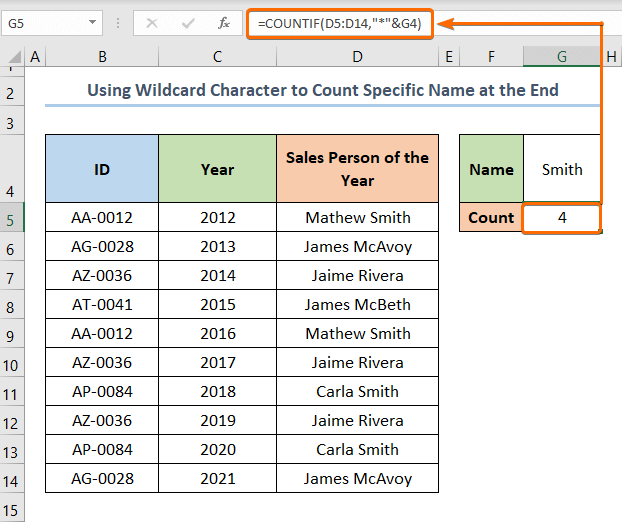 The SUMPRODUCT function is employed in the scenario when we have to count the name while considering both uppercase and lowercase characters.

Assuming, we have a table which shows the Employee ID, the Department they are employed in, and finally the Employee Name. We can use the dataset (in B4:D14 cells) to demonstrate our third method. 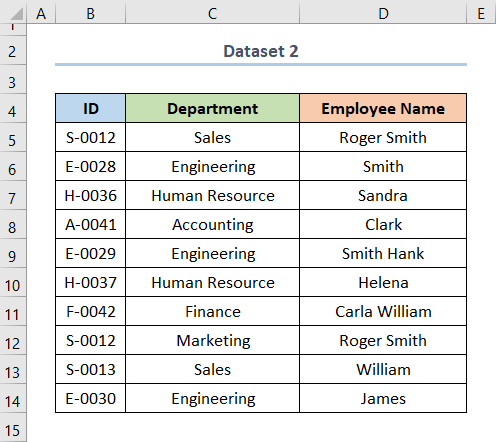 We will employ the SUMPRODUCT function in conjunction with the EXACT function to count the number of cells containing the specific name. 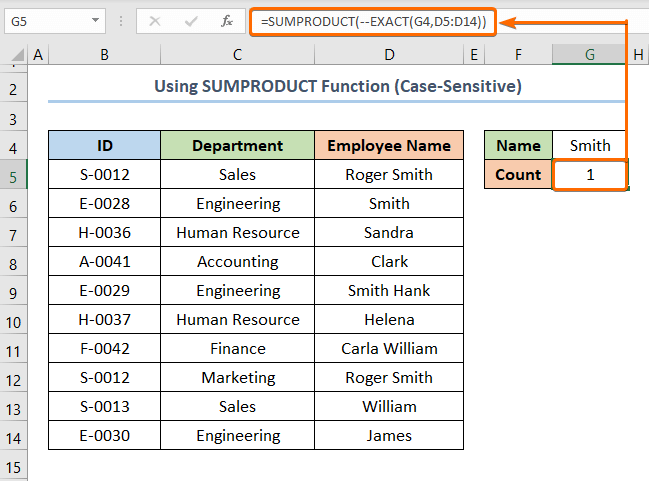 To locate the desired name, anywhere in the cell we need to utilize 3 functions SUMPRODUCT, ISNUMBER, and FIND. 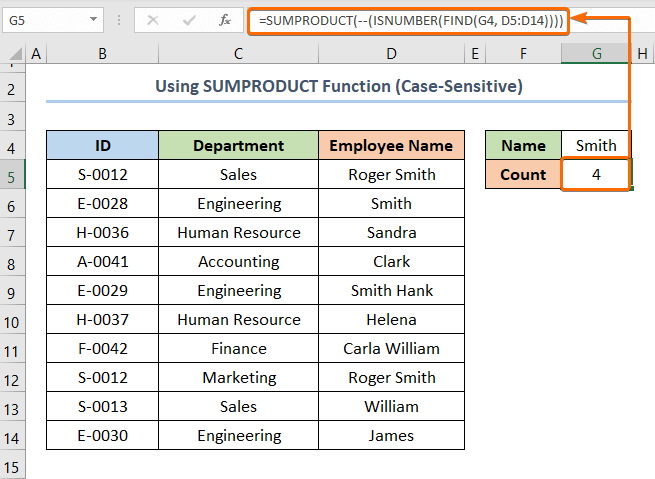 To develop a case-insensitive formula for counting the names located anywhere in the cell we’ll need the  SUMPRODUCT, ISNUMBER, and SEARCH functions. 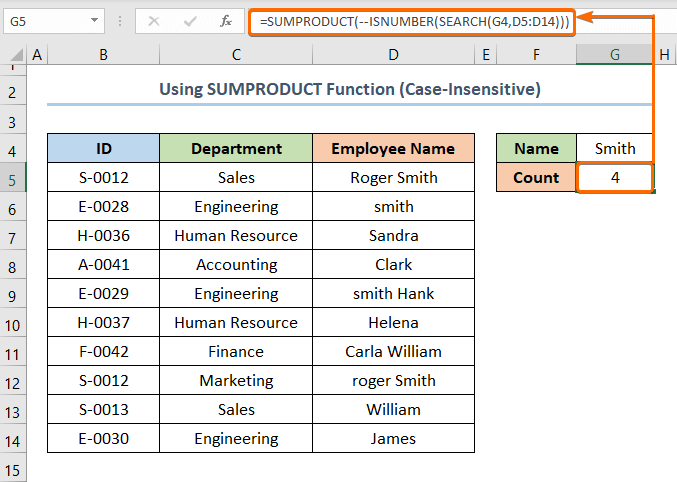 Read More: How to Count Specific Words in a Column in Excel (2 Methods)

To conclude, the 3 simple methods mentioned above will help you to count the specific names in Excel. If you have any questions or feedback, please let us know in the comment section, below or you can check out our other articles on the ExcelDemy website.

Hello! Welcome to my Profile. I completed my BSc. at Bangladesh University of Engineering & Technology from the Department of Naval Architecture & Marine Engineering. Currently, I am conducting research & posting articles related to Microsoft Excel. I am passionate about research & development and finding innovative solutions to problems.