Home » Excel Basics » What is and How to Do Absolute Cell Reference in Excel?
Excel Basics

What is and How to Do Absolute Cell Reference in Excel?

What is absolute cell references?

Say, for example, you have a formula like this ‘=D4*F2’ in cell E4. If E4 is an active cell then click Fill Handle, hold it and drag over the cells you want to fill. See the following example. We have filled the cell ranges E5: E14 in our example. Check the formula in every cell. For example, we just double-click on cell E8 to check the formula in it. You will find that the formula is ‘=D8*F6’. Row numbers have been increased by 4, D4 has been D8 and F2 has been F6. These are relative references. 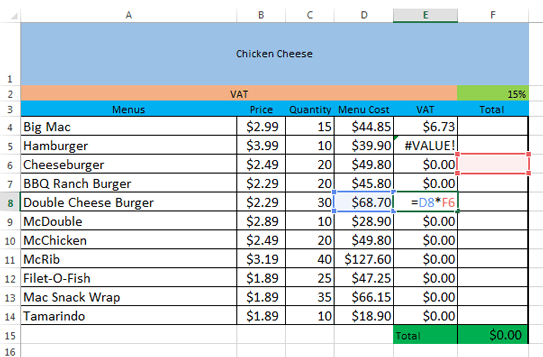 Read More: How to reference a cell from a different worksheet in Excel

But we want the F2 cell’s value will be unchanged, and its value will be as it is in the mother formula. For this, we have to use absolute references. We shall write newly our formula in cell E4 as ‘=D4*$F$2’. We have used a dollar sign($) before the column letter and row number. This is the system how you can make a cell reference absolute. 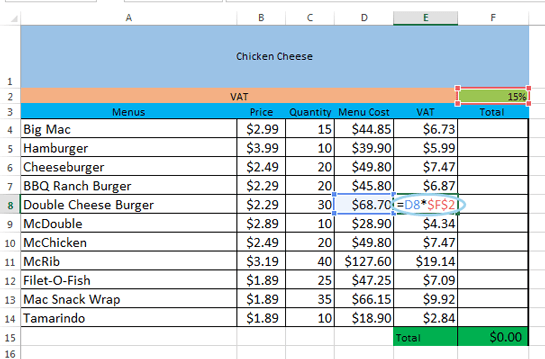 We shall create a formula in cell E4 to calculate the VAT for all items in column E. In our example, the VAT rate is 15% and the value is set in cell F2. We shall use $F$2 absolute reference in our formula. As every formula is using the same VAT rate, we want that reference will remain constant when the formula is copied and filled to other cells in column E.

Select the cell that will contain your formula. In our example, the cell is E4 where we shall use the formula. 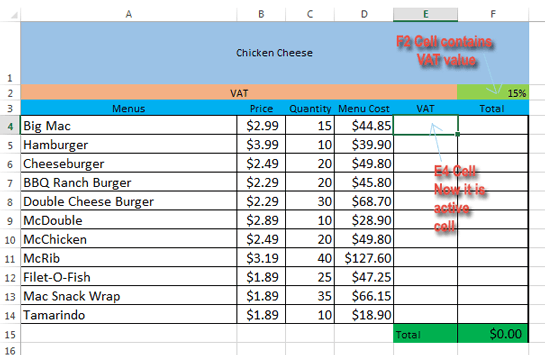 Enter your formula to calculate the desired value in the selected cell. We shall type ‘=D4*$F$2’ in cell E4. 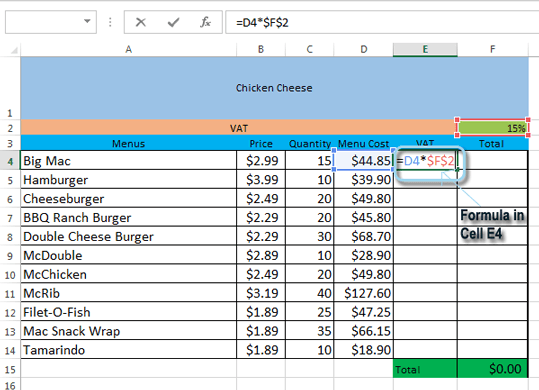 Now press Enter on your keyboard. The formula will be calculated internally and you will see the calculated result in cell E4.

By default when you pressed Enter, the active cell is now E5. Use up arrow(↑) key to make E4 an active cell again. Now locate the fill handle in the lower-right corner of cell E4. 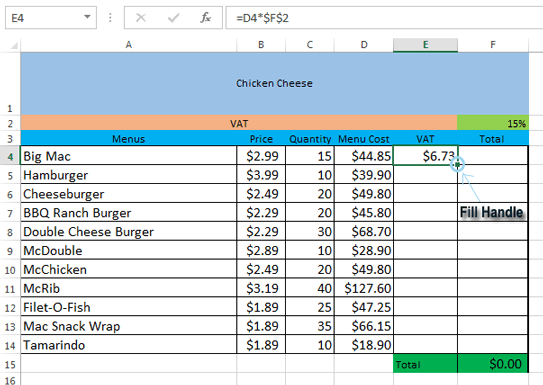 Now click the fill handle, hold it and drag over the cells you wish to fill. We are selecting cells E5: E14 in our example. 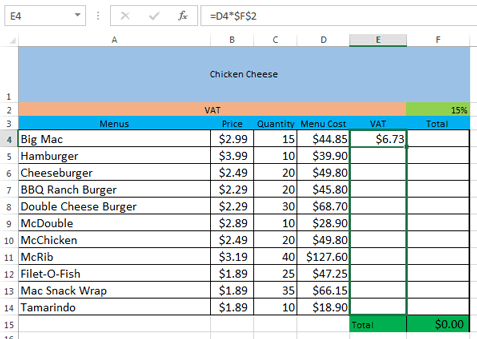 Now release the mouse. The formula, we made in cell E4, will be copied to every cell we have selected with relative references. Calculated values will be visible in every cell. 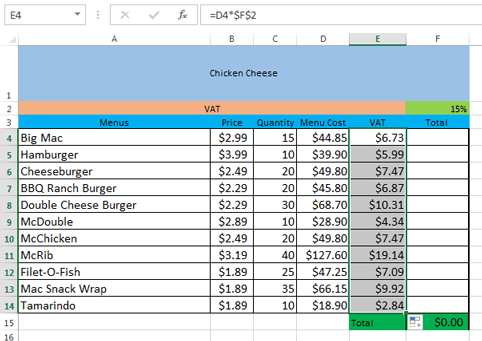 Absolute cell references in Excel. Cells are filled with values.

Note: To check whether your formula is correct, just double-click on any cell from the filled cells. You will find that every formula has $F$2 absolute references, relative references have changed with the row numbers. For row number 8, the formula is ‘=D8*$F$2’, just the row numbers have been changed. 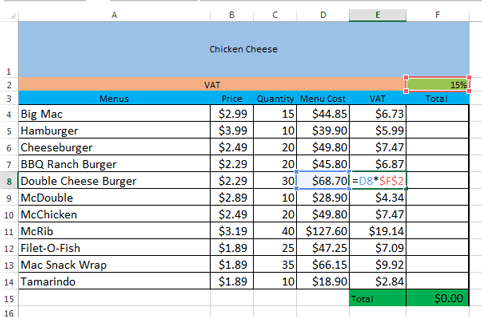 In the following image, $A1 is a mixed cell reference.

Here I want to show you the shortcut way to make an absolute cell reference with an example.

At first, I take the C1 cell to edit mode. Now I keep the cursor on the A1 relative reference. 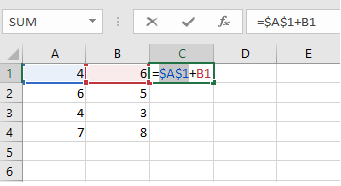 Continuing from the above picture…

Now I press the F4 key again. $A$1 will be converted to a mixed cell reference: A$1. The column will be relative but the row number will be absolute.

Now if we again press the F4 function key again, then A$1 will be converted into $A1, which means the Column letter will be absolute and the row number will be relative.

Continuing from the above procedure……

Again if we press the F4 function key again (Fourth times), then $A1 will be converted into A1 relative cell reference.

How to Group Rows in Excel by Name (3 Effective Ways)

How to Separate City and State in Excel (3 Effective Methods)

How to Rearrange Data in Excel (5 Suitable Examples)