How to Delete Columns Based on Header Using VBA in Excel

In general, Excel workbooks contain numerous columns. Sometimes, by the time some columns become redundant. So, we need to delete those columns. Excel VBA delete columns based on header with ease.

Let’s say, we have a dataset where sold Products are displayed with Order Date, City, Category, Quantity, and Unit Price. By time one or two columns become redundant such as City or Category as a result we want to delete them. 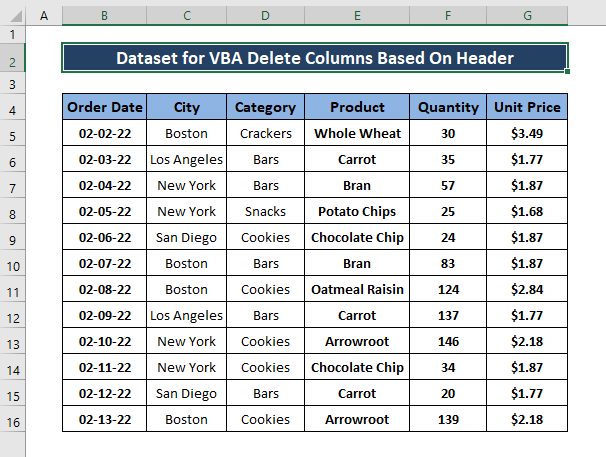 In this article, we demonstrate different variants of Excel VBA to delete columns based on header.

Delete Columns Based on Header.xlsm

Before proceeding to demonstrate any methods, it’s necessary to know the ways to open and insert a Module in Microsoft Visual Basic in Excel.

Go to any worksheet, Right-Click on it > Choose View Code (from the Context Menu). 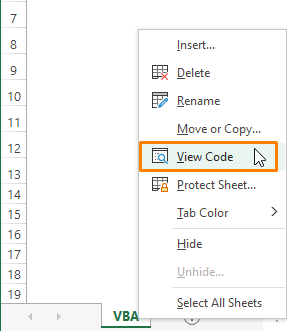 🔼 After opening the Microsoft Visual Basic window, Select a Worksheet > Right-Click on it > Select Insert (from the Context Menu) > then Choose Module. 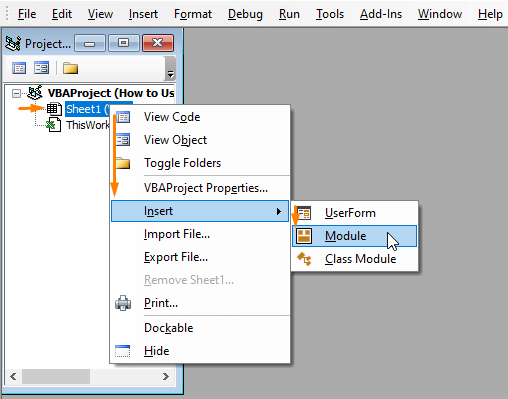 🔼 You can also do it by Selecting Insert (from the Toolbar) > then Choosing Module.

Method 1: Excel VBA to Delete Specific Column from a Range Based on Header

From the dataset (shown below), we know that our worksheet contains multiple columns. Some of the columns (i.e., City or Category) become redundant over time. So, we assign a range (i.e., B4:G16) where our columns reside. Then we execute a macro code to delete specific columns from the range. 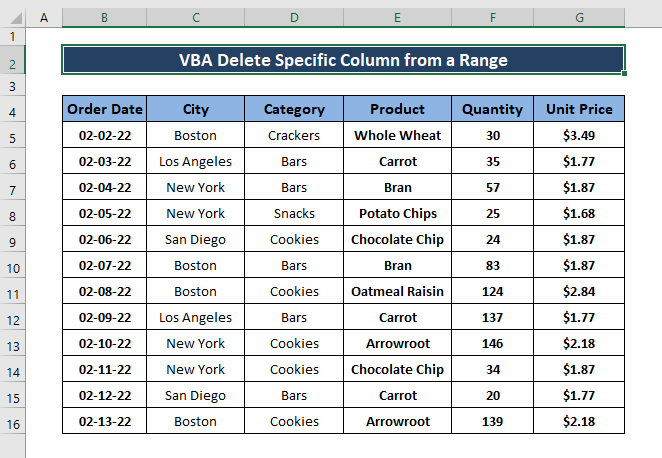 Step 1: Open Microsoft Visual Basic then insert a Module using the instruction section. Paste the following macro in any Module. 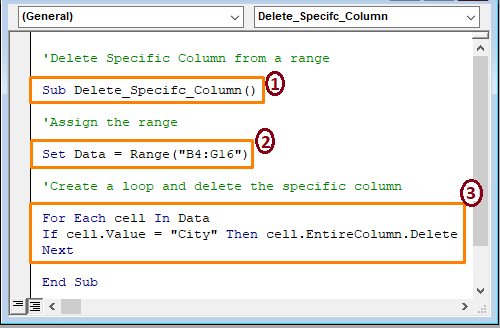 1 – start the macro procedure by declaring the Sub name. You can assign any name to the code.

3 – create a loop and assign the cell value to a specific cell name (i.e., City). Then inspect each cell value in the range (i.e., B4:G16) and delete matched columns.

Step 2: Press F5 to run the macro. After returning to the workbook, you see the specific column is deleted as depicted in the following picture. 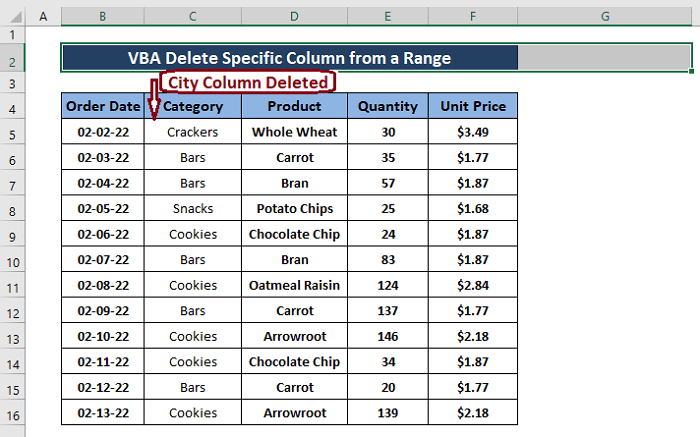 You can assign any column name in the macro and the macro will delete the entire column. Also, you can change or modify the range according to your demand.

Read More: VBA Macro to Delete Columns Based on Criteria in Excel (8 Examples)

Our dataset has columns from row 3 and we want to delete the City column. If the City column exists in other worksheets at row 3, the macro is capable of deleting that also. 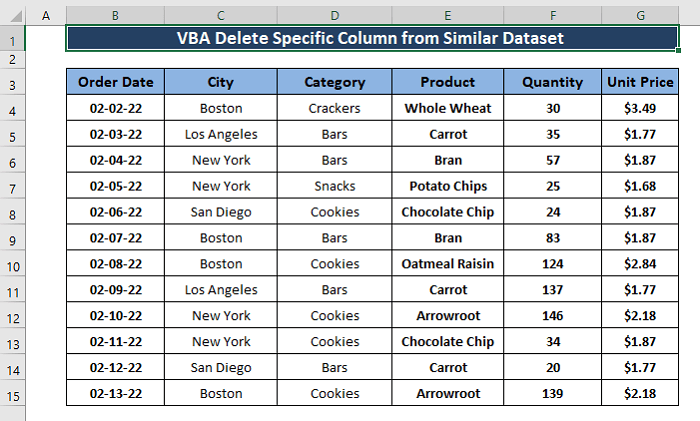 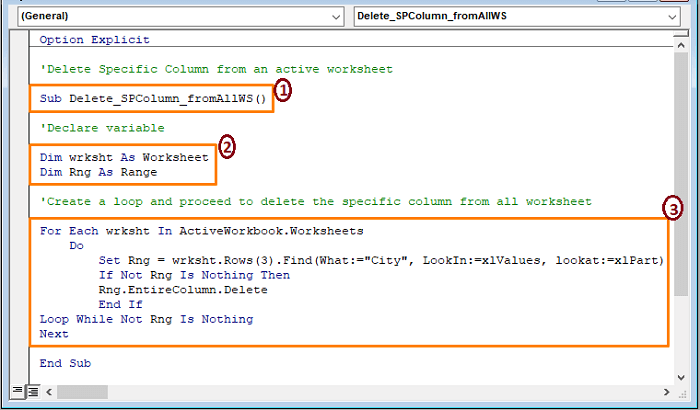 ➤ From the above image, in the sections,

2 – declare the variables as Worksheet and Range.

3 – create a loop where the macro finds the City column at row 3 then deletes it. Afterward, the macro looks into other worksheets and matches the column name (i.e., City) at row 3. If a similar column is found at a similar position the macro deletes them.

Step 2: Hit F5 to run the macro and it deletes the City column from each worksheet containing the particular column. However, you have no other worksheet with the same column name (i.e., City) at the same position (i.e., row 3). As a result, you see only one worksheet from where the specific column gets deleted. 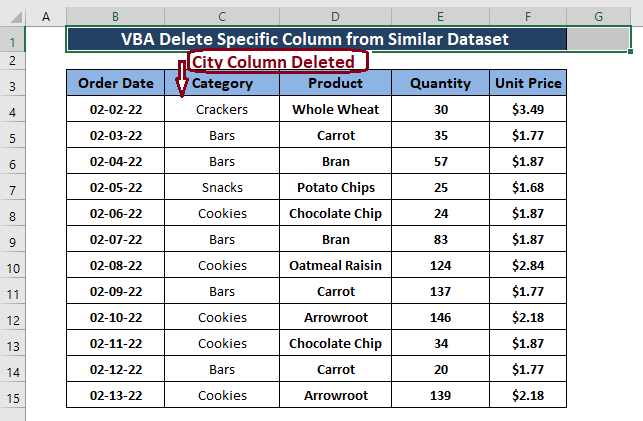 Read More: How to Delete Duplicate Columns in Excel (6 Ways)

Suppose, we want to delete a specific column from a specific worksheet. Excel VBA macros also offer macro variants to deal with it. The VBA InStr function provides a start position and strings that are to be searched. Then, a simple VBA delete command can delete the entire column.

We have columns started at row 4 as shown in the below picture. 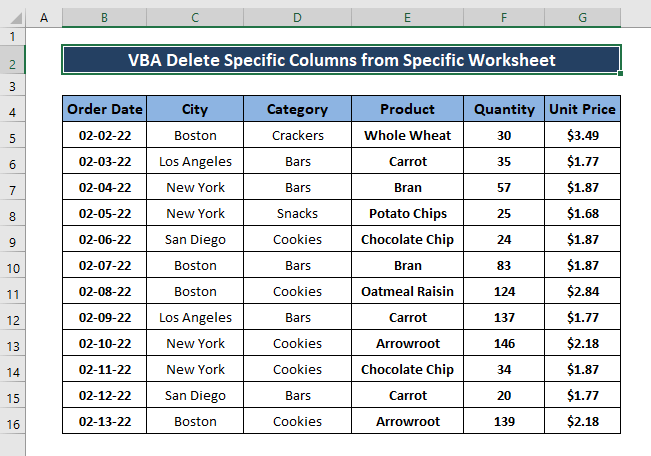 Step 1: Type the below macro code in the Module (inserted by following the instruction section). 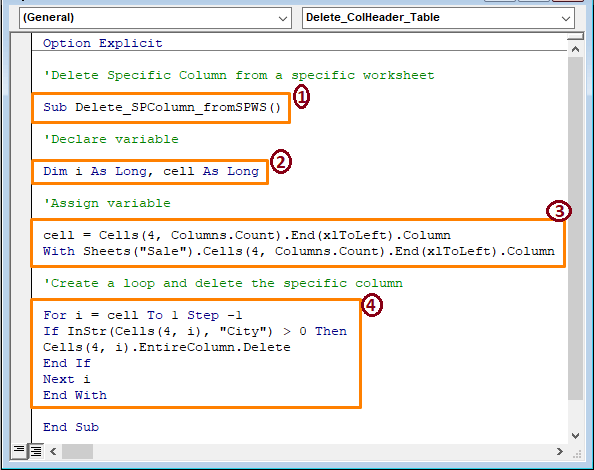 2 – declare the variables as Long.

3 – assign the cell variable from a particular position (i.e., row 4 and iterative column). And assign a specific worksheet (i.e., Sale).

4 – create a loop with step and the VBA InStr function search the City column in the assigned worksheet. Then VBA deletes the column by a delete command.

The VBA InStr function takes multiple strings. Therefore, you can insert multiple column names to delete them from the specific dataset. For representation, we just delete only one column (i.e., City) from the worksheet.

Step 2: Press F5 to run the macro. Then return to the worksheet, you see the City column gets deleted. 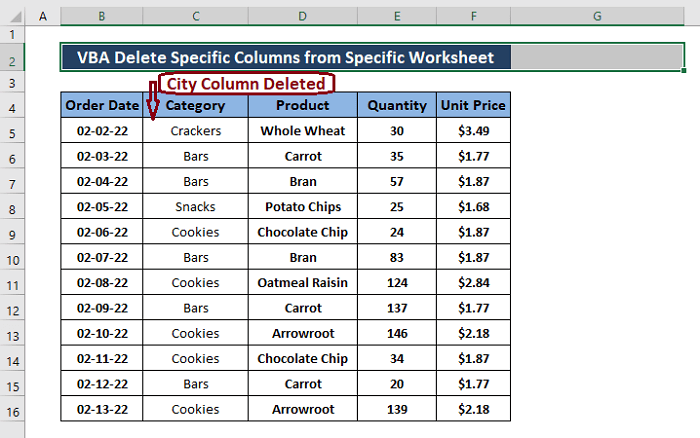 Now, we want to delete columns from an assigned list. The list contains multiple columns that we desire to delete from the dataset. We can assign the City and Category columns to a list using the VBA Select Case statement. The below depiction shows our dataset. 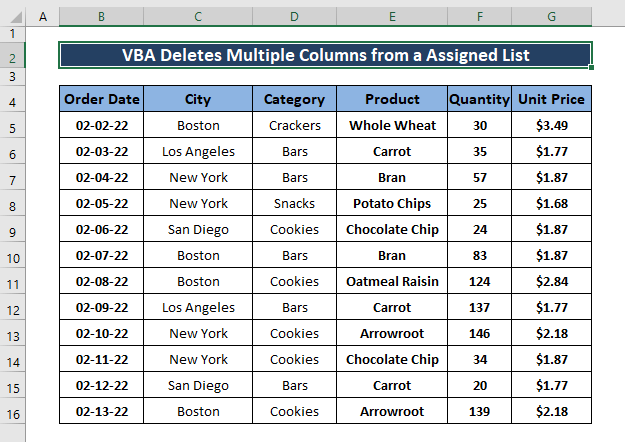 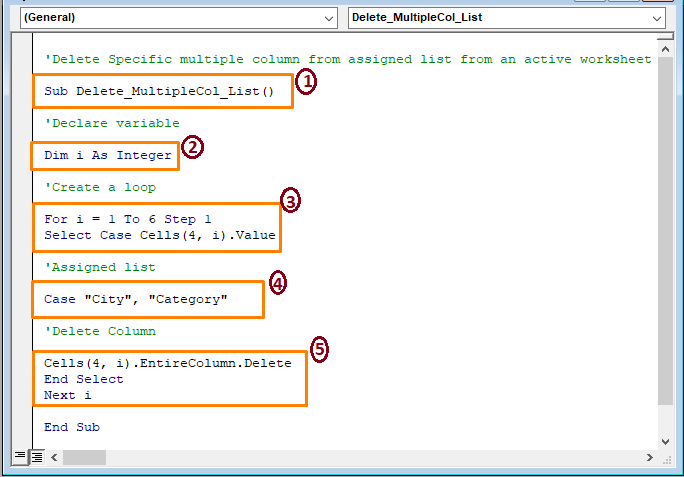 ➤ From the above image, the code’s sections,

1 – take forward the macro by setting the Sub name.

2 – declare the variable as Integer.

3 – create a loop of 6 iterations as we have 6 different columns in the dataset. Also starts the execution from row 4 where all the columns start using cell property.

Step 2: In order to run the macro press F5.  Pressing F5 for the 1st time deletes the 1st assigned column (i.e., City) from the worksheet. 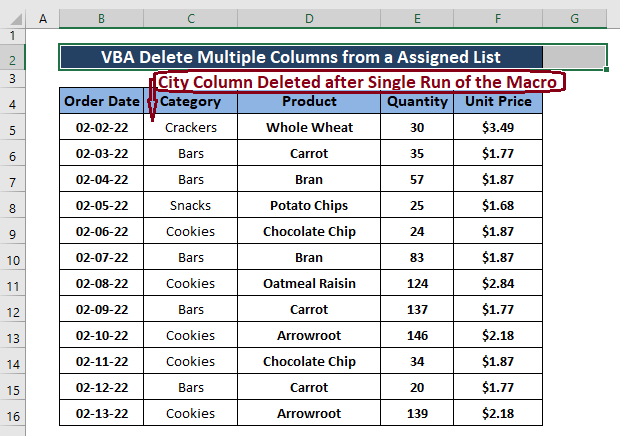 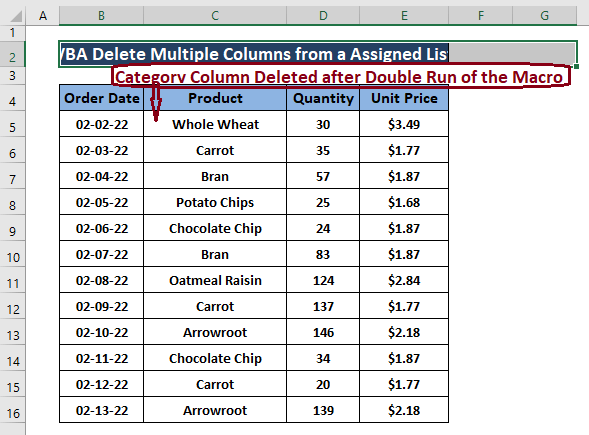 Read More: How to Delete Unused Columns in Excel(Easiest 5 Methods) 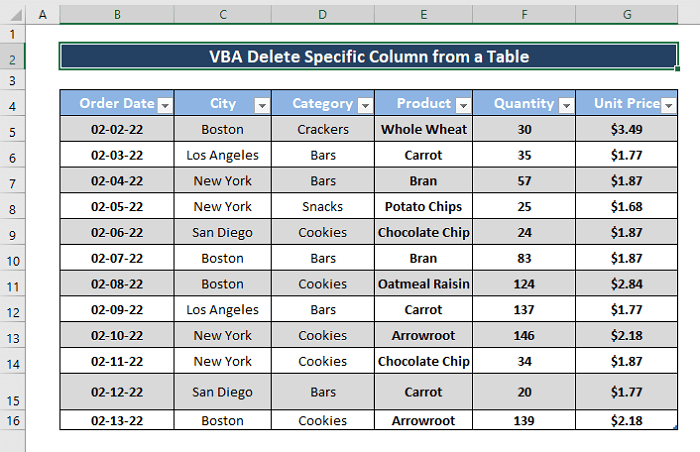 Step 1: Use the following macro code in any Module of any Microsoft Visual Basic window. 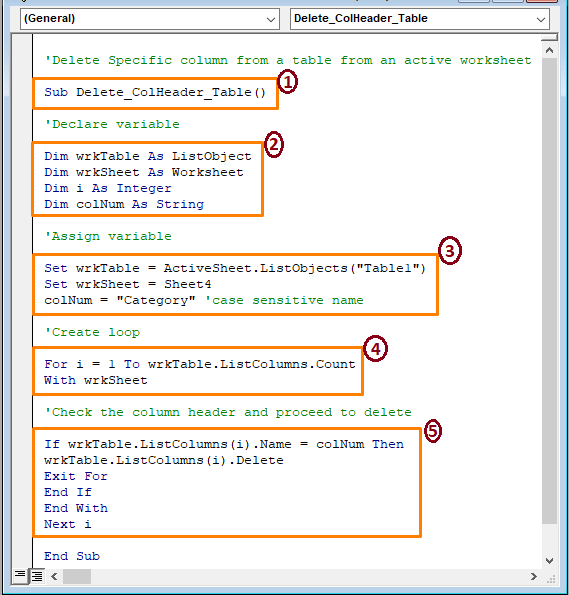 ➤ The above image has code sections,

1 – take forward the macro by setting the Sub name.

2 – declare the variables as a ListObject, Worksheet, Integer, and String.

4 – create a loop to count the Table columns in the worksheet.

5 – delete the column that matches the colNum.

Step 2: To run the macro press F5. After returning to the worksheet, you see the Category column is absent, similar to the following image. 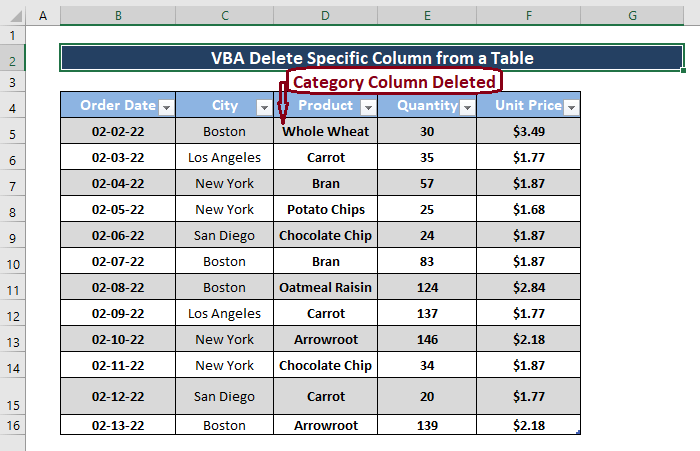 There can be instances where characters may be included with text in column headers. Also, identical text with different numbers can be used to name the columns. In those cases, this method is pretty handy. In this method, we use an asterisk (*) as a character to name one or two columns as depicted in the following macro. 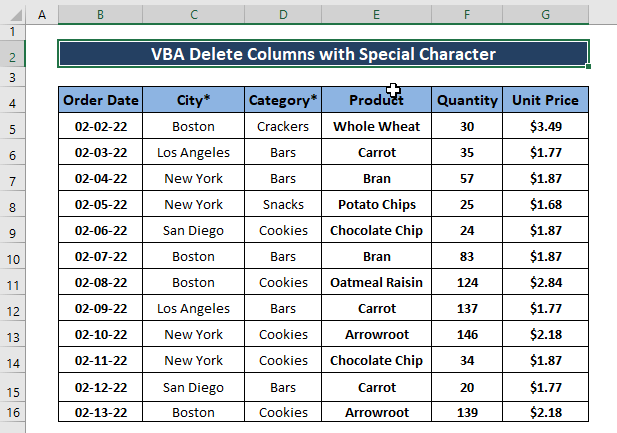 Step 1: Use the following macro in any Module.

➤ The code is marked in parts,

1 – begin the macro by setting the Sub name.

2 – assign the active worksheet to count columns from.

3 – VBA InStr function searches for asterisk (*) in the column’s header. After matching, the VBA delete command deletes the column.

Step 2: Push the F5 key to run the macro. Then back to the worksheet, you see both asterisk (*) containing columns get deleted. 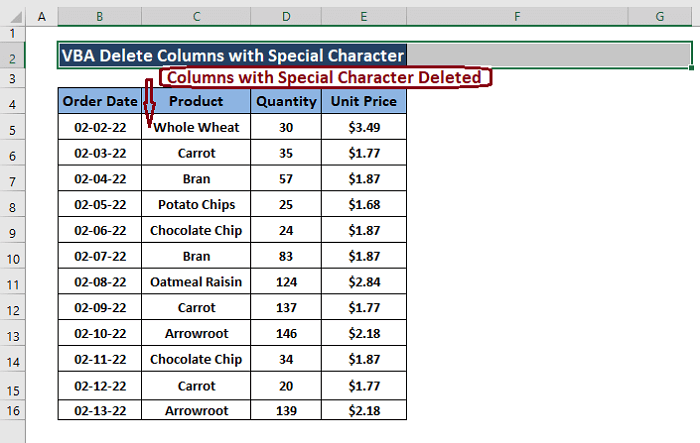 Related Content: How to Delete Columns in Excel Without Affecting Formula (Two Ways)

In this article, we’ve demonstrated multiple macro variants of Excel VBA to delete columns based on header. Each macro we demonstrated has its own convenience depending on the data type. Hope these above-mentioned methods serve your purpose. Comment, if you have further inquiries or have anything to add.