We knew how to create custom VBA functions and use them in the worksheet. This article focuses on various kinds of arguments you can use in VBA functions. Function arguments can be variables (including arrays), constants, literals, or expressions. Keep in mind the following about function procedure arguments:

The following sections demonstrate how to use arguments effectively with functions. I didn’t cover optional arguments in this article.

A VBA function with no argument

Though most VBA functions use arguments, that’s not a requirement. Excel has some predefined functions that don’t use any arguments, such as RAND(), TODAY(), and NOW().

RAND(), TODAY(), and NOW() functions don’t use any arguments.

The following is a simple example of a custom function that has no arguments. This function returns the UserName property of the Application object. This name appears in the Personalize your copy of the Microsoft Office section of the Excel Options dialog box. This function is very simple, but it is the only way you can get the username to use in a worksheet cell or formula.

When you enter the following formula into a worksheet cell, the cell displays the name of the current user:
=OfficeUserName()

When you use a function with no arguments, you must include a set of empty parentheses.

A function with one argument

Before entering into details, at first, I introduce you to the method Speak(). This method has the following syntax:

The expression represents a Speech object.

Though Speak() method can take three arguments, but Text argument is the required one, the rest are optional. I shall use the Speak() function by passing only the Text argument. So, for this case, it is a function with one argument. This method uses an Excel text-to-speech generator to “speak” the text passed to it through Text argument.

Note: To hear the voice, your system must be set up to play sound.

For example, if you want to use the SpeakTheText() function to hear the content of cell A1, you have to use the following formula:

You can use this function in a slightly more complex formula, as shown below. In this example, the argument is a text string (“Good achievement”) rather than a cell reference.

The above formula calculates the sum of the values in Column A. When that sum exceeds 1,000, you will hear “Good achievement”.

When you use the SpeakTheText function in a worksheet formula, the function always returns 0, because this function is returning nothing. In other words, I can say, there is no value assigned to the function’s name (SpeakTheText) variable.

Read More: An Excel VBA function with a range argument

Another example of VBA function with one argument

Okay, now I’m going to deal with a more complex function. This function is designed for a sales manager who calculates the monthly commission that he has to pay to his salespersons. To boost up the sales of the company, the commission rate structure is based on the amount sold— those who will sell more will earn a higher commission rate.

You can use more than one method to calculate commissions for various sales amounts.

Assume that you have the sales amount for a particular salesperson in a worksheet cell A4. Now you can use the following formula: 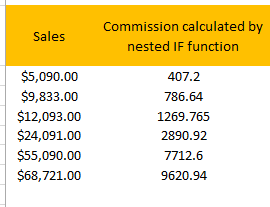 Commission calculated by if function.

This approach isn’t a good solution for the following reasons:

A simple and better solution is using a VLOOKUP table. I have entered the data of the above table (Monthly Sales Target & Commission Rates) in cell range G8: H11. Click this link to know about VLOOKUP function, if you don’t know. 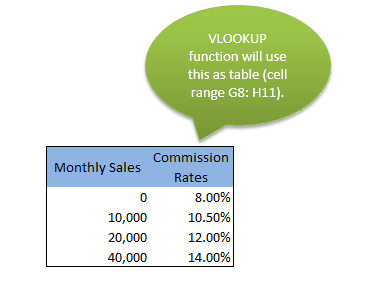 VLOOKUP table for the data that calculates the commission rates for sales target.

Use this function in other cells to calculate the sales commission earned by the sales force.

Like the following one, you can create a custom function to calculate the commission earning by the sales force.

I have used the custom function in cell D4 using the argument A4, as A4 holds the sales. Then I have copied this function for other cells. The figure below shows this: 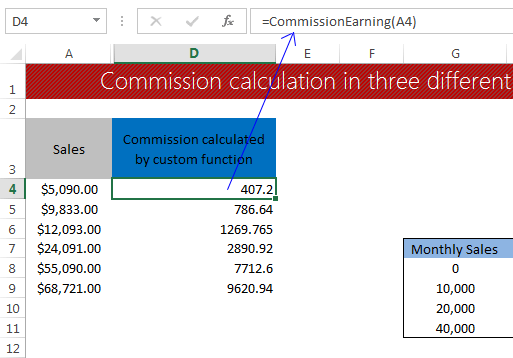 Commission calculated by the custom function.

A function with two arguments 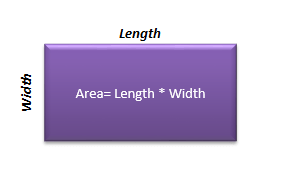 This is a very simple function. Below shows the code:

This function takes two arguments(Length and Width) from the user and shows the area of the rectangle in a message box.

Showing area of a rectangle in a message box.

A function with a range argument

Well, the last type of argument is the range. It is demonstrated here.

Let’s make some assumptions. Say, you have some values. The number of values may be 100, 1000, or any. Your boss has told you to give him the average of the largest 5 values of this data. What can you do? First, you’ll think that whether there is any predefined function in Excel to solve it efficiently. Yes, it has a LARGE function. The LARGE function does not give the result directly. You have to use it trickily. You can use the LARGE function in the following way (assuming that you have 20 values and the data range is named “DataAvg”):

The above formula will return the average of the largest 5 values of your data. The formula works fine, but you will face a problem when next time your boss will ask you to average of 100 values from a data range of say 2000 values. This time you have to rewrite this formula in a new way and it is really toilsome. Here comes the custom VBA function, TopAverage (DatAvg, Num). 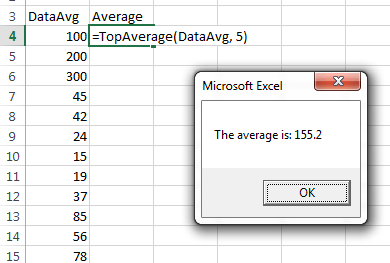 The average is showed in a message box.

I have written the TopAverage function in the following way:

This situation is an example of how a custom function can make things easier for you. This function takes two arguments: DataAvg and Num. DataAvg represents the range of data that you’re working with. Num is the number of largest values you want to average from the data range.

Read More: An Excel VBA function with one argument

The code initializes the Sum variable to 0. Then it uses For- Next loop to calculate the sum of the Num number largest values. Notice that I have used the built-in LARGE function of Excel in the code. You can use any worksheet function in the custom VBA function using WorksheetFunction and a period before the function name (WorksheetFunction.LARGE).

Finally, the average is found just by dividing the Sum by the Num (Sum/Num). I showed the result in a message box with this text: “The average is: “.