In this article, I will discuss (in detail) the Excel VBA Worksheet Events and their uses. This is a very thorough guide and I have tried to explain it in layman’s language. If you fail to understand any topics, put your confusions in the comment box.

This article is part of my series: Excel VBA & Macros – A Step by Step Complete Guide and Learn Excel VBA Events Completely with 5 Tutorials.

Worksheet-related events are some of the most useful. Learning how to use these events can benefit you most as these events provide your applications to do impossible things.

For example, if you change something in the cell named “Input”, then “Target= Input”. The following example displays a message box that shows the address of the Target range:

After entering and saving the above code in the code module for the worksheet “Sheet1”, I entered 50 in cell B6 and pressed enter. The following image is shown: 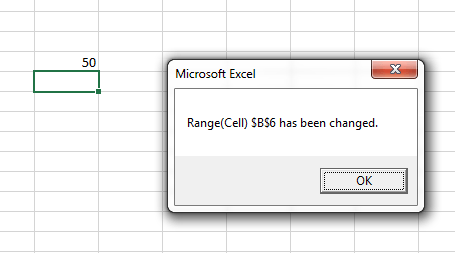 In some cases, the Change event will not work as per your expectation. For example:

How to Monitor a specific range for changes

The Change event executes when any cell on the worksheet changes. But the maximum time you want that changes made to a specific cell or cell range will be counted. How do you do that? 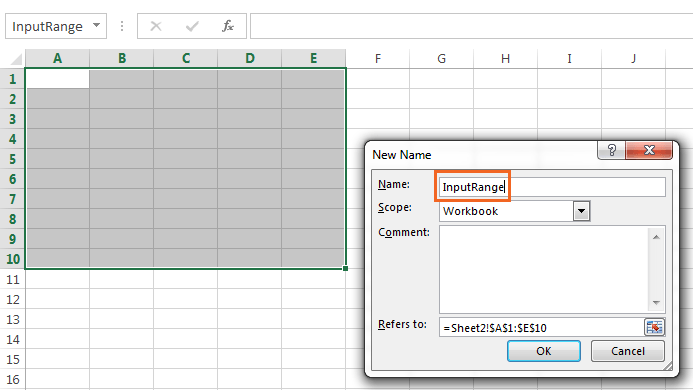 I am now going to write the Worksheet_Change event-handler procedure in such a way that whenever a user changes something in the cell range InputRange(A1:E10), a message box will pop up with the information which cell has been changed.

The following code shows the first and last statement of the Worksheet_Change event-handler procedure:

You see that the Worksheet_Change event-handler procedure has a Target argument. It is of the Range object type. Target corresponds to a worksheet cell that has been changed by a user. It means that say you have made some changes in the cell F15, then the Target argument= F15.

The code is explained line by line below:

Read More: How to Use Non-object Events

In the following quotation, I have explained the Union function in VBA.

Union function in VBA: let’s explain it with a real-time example. Say a user has done some changes in cell B5. Then the above Worksheet_Change procedure’s Target argument will hold the reference of cell B5. Simply you can think like this: Target=B5. And you know VRange is set to hold InputRange(A1: E10), so VRange= InputRange= A1:E10. So Union(Target,VRange).Address= Union( B5, A1:E10).Address= Union(A1: E10).Address= A1: E10= VRange.Address. So for change in cell B5 will execute the statement MsgBox “The changed cell is in the Input Range.”

Our preceding Worksheet_Change procedure has a bug: a user can make changes in more than one cell, so Target argument may contain a range. Therefore, the procedure requires checking all the cells in Target. So my procedure has to check each changed cell and if the cell is within the range, then a message box will be displayed with some information.

The above code will generate three message boxes(one under another) shown in the following image when a user makes changes in the cell range C5: C8.

Change Event is executed when some changes have been made in cell range C5: C7.

The following example procedure explains how a SelectionChange event works. It executes whenever the user makes a new selection on the worksheet: 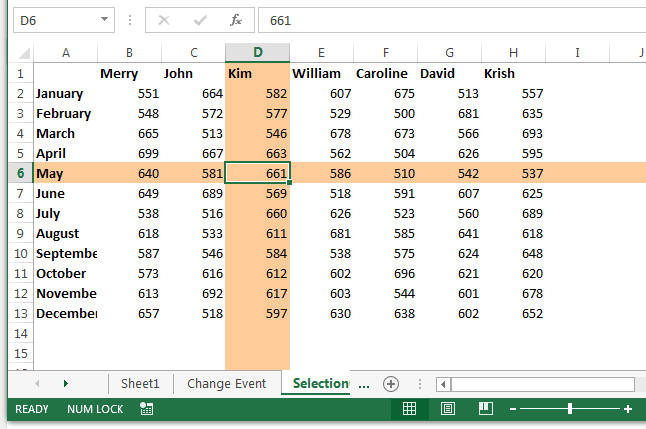 Move the cell cursor. Active cell’s row and column will be shaded.

Just think that you don’t want to show a shortcut menu when you right-click on a worksheet cell. In this case, you can use this Worksheet event. The following procedure makes the Cancel argument to TRUE. This cancels the working of the RightClick event that would show a shortcut menu. Instead, a message box appears. 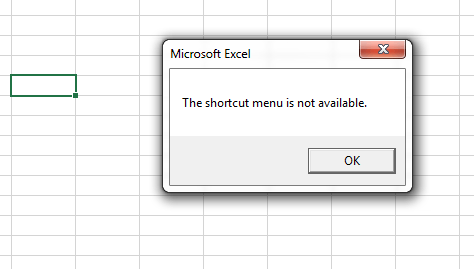 BeforeRightClick Event cancels the RightClick event if Cancel argument is made TRUE.

So, this was all from me on this topic. Let me know in case you face any issues while using this article.