How to Organize Things Alphabetically in Excel (4 Methods)

Organizing data alphabetically is one of the most basic tasks in Excel. Indeed, it is also a valuable tool when working with large sets of data. Keeping this in mind, this article aims to explain 4 useful methods on how to organize things alphabetically in Excel.

You can download the practice workbook from the link below. 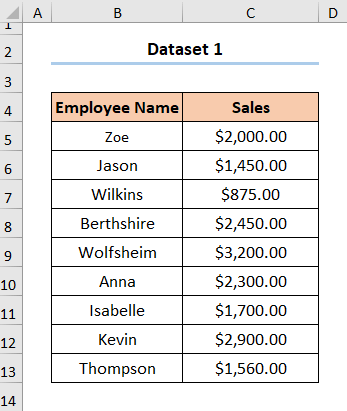 Organizing a column alphabetically can be done very quickly and easily. Just follow these steps. 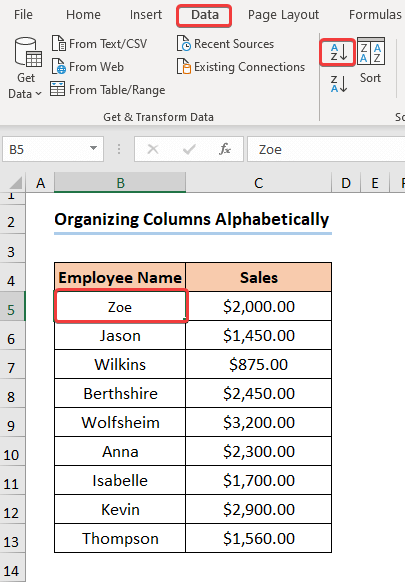 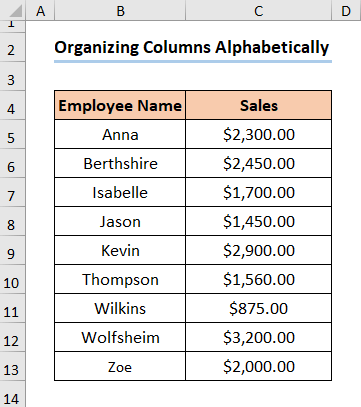 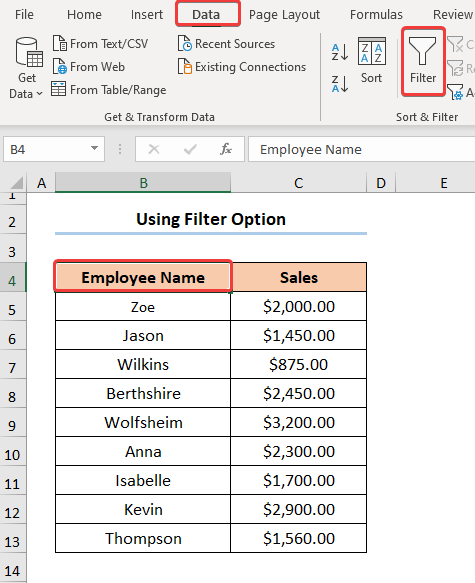 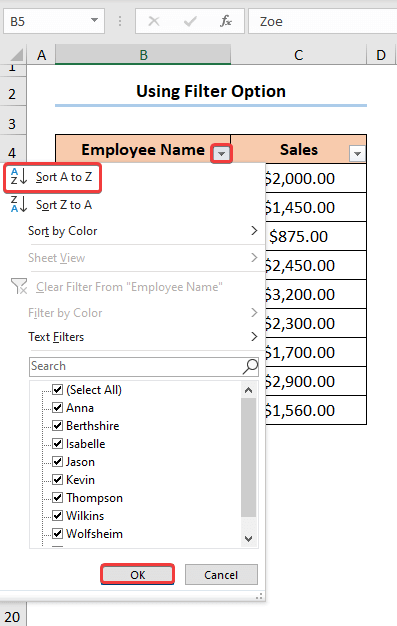 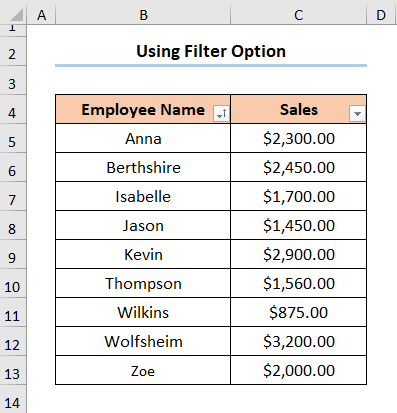 1.3 Organize Each Column Alphabetically with Formula

Suppose we have the following dataset shown in B4:C13 cells. Here, the first column shows the Employee Names designated in Project Alpha, and, the second column depicts the personnel in Project Beta. 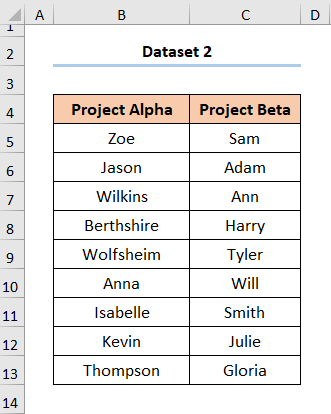 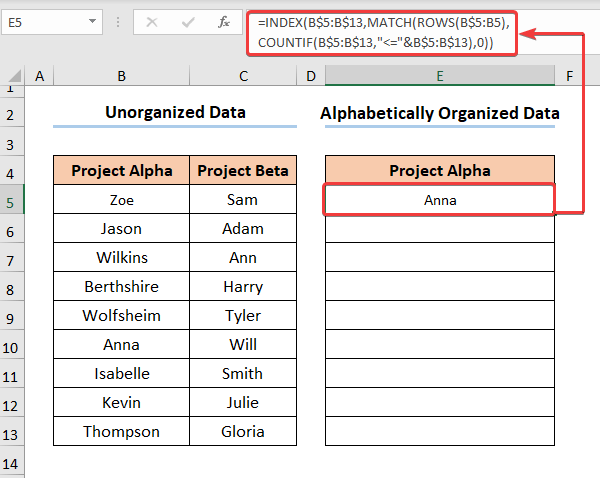 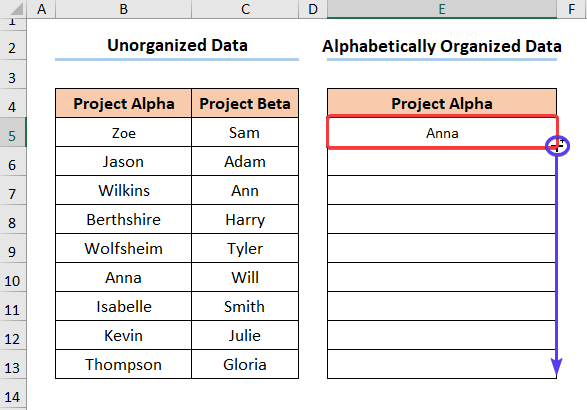 Eventually, the data will be organized in ascending order as shown below. 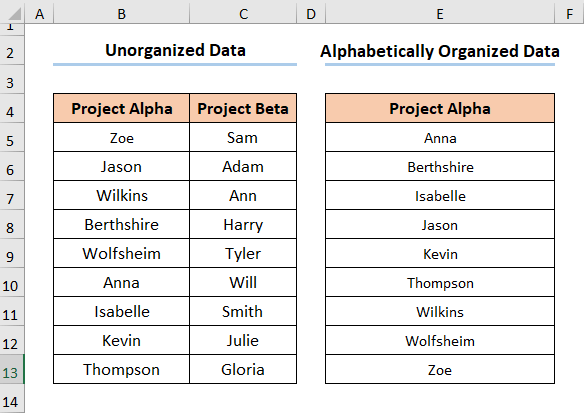 In a similar fashion, you can organize the F5:F13 cells (Project Beta) alphabetically. 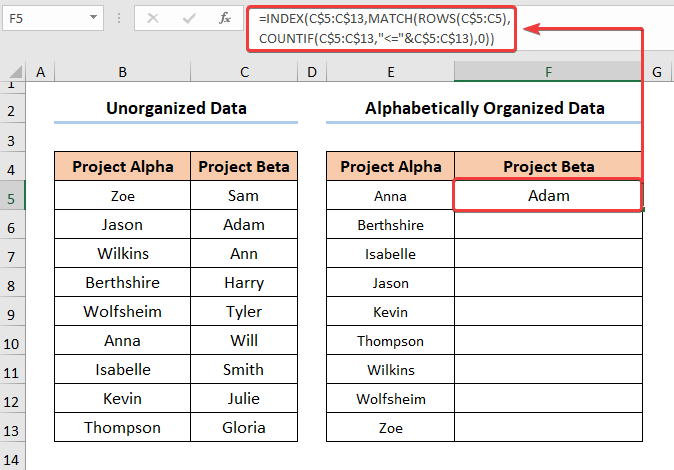 Finally, we get the resulting table as depicted in the picture below. 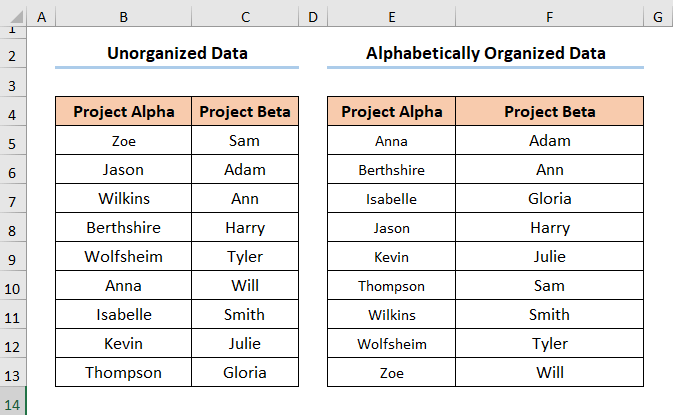 Read More: How to Organize Data in Excel from Lowest to Highest (with Quick Steps)

2. Organizing a Range of Cells Alphabetically in Excel

In case you’re data consists of several columns and you want to arrange them. Then, our method has you covered. Let’s see the step-by-step process.

Assuming we have the dataset shown below in B4:D13 cells. Here, the first column shows the Employee Names, followed by the second column which displays the Sales amount in USD, and lastly, the third provides the Country the store is located. 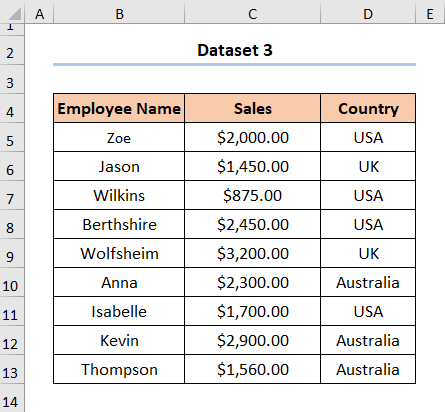 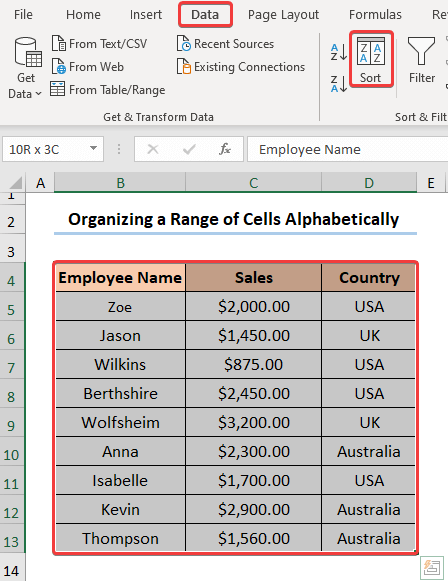 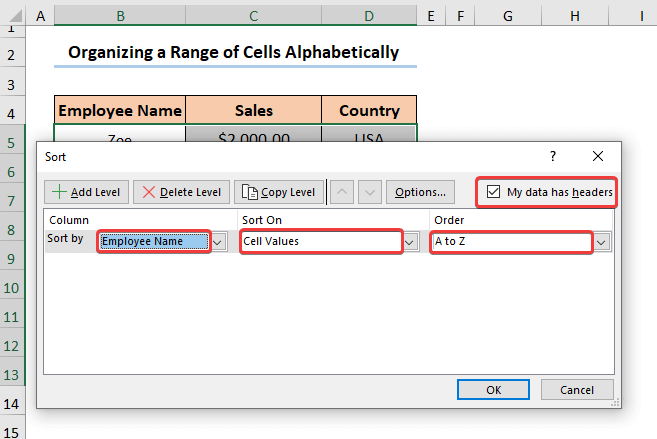 Finally, click on OK to close the dialog box and your data will be organized. 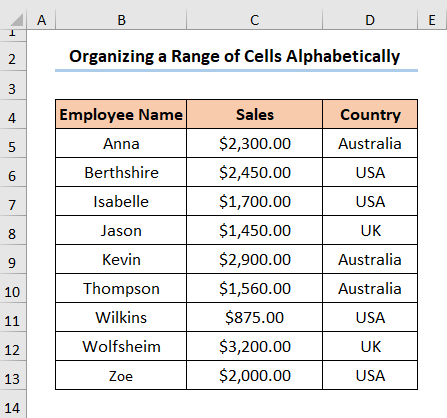 So far in this article, we’ve only discussed organizing columns but, you can also organize rows if your dataset is arranged horizontally. Let me demonstrate.

The process of organizing rows is remarkably similar to that of columns. Let’s discuss it in detail.

Let’s consider the following dataset shown in the B4:I8 cells. The table shows the marks of each student in 4 of the subjects i.e., Physics, Chemistry, Biology, and Math. 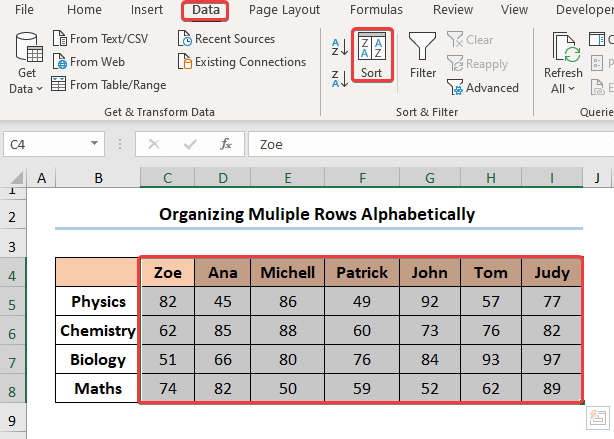 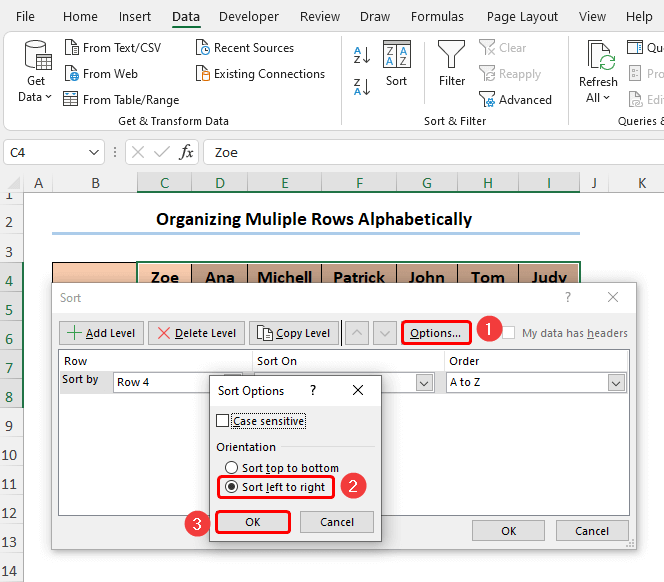 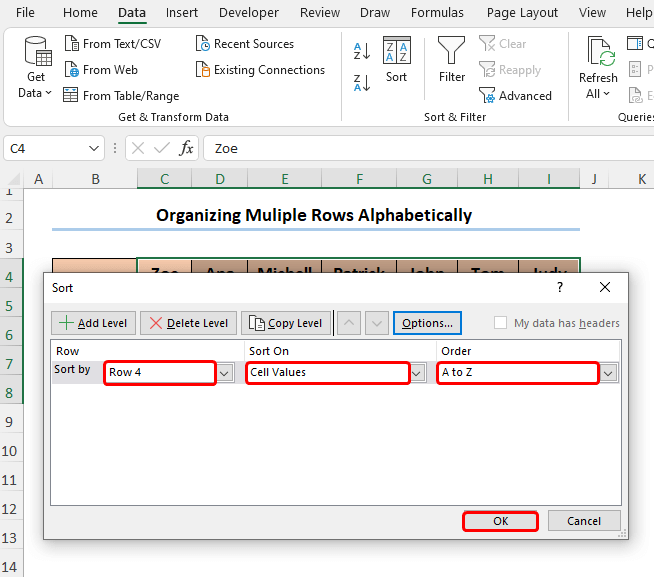 Consequently, the data is now organized in ascending order based on the names of the students.

3.2 Organize Each Row with Excel Formula

Similar to the formula for arranging columns, we can arrange rows alphabetically using the INDEX, MATCH, COLUMNS, and COUNTIF functions. It’s a simple process, so, just follow along.

Let’s assume, the dataset shown in B4:H5 cells. the first row shows the Employee Names designated in Project Alpha, and, the second row depicts the personnel in Project Beta. 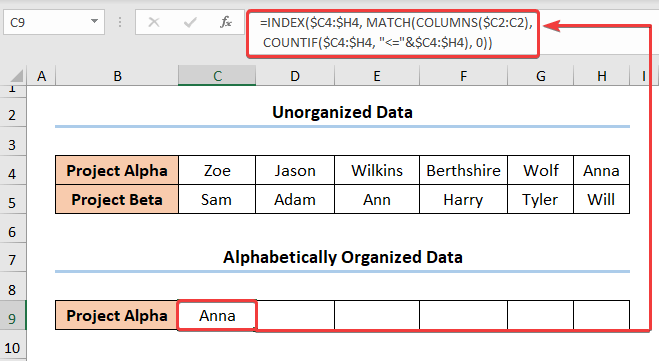 Likewise, repeat the same procedure for the second row. 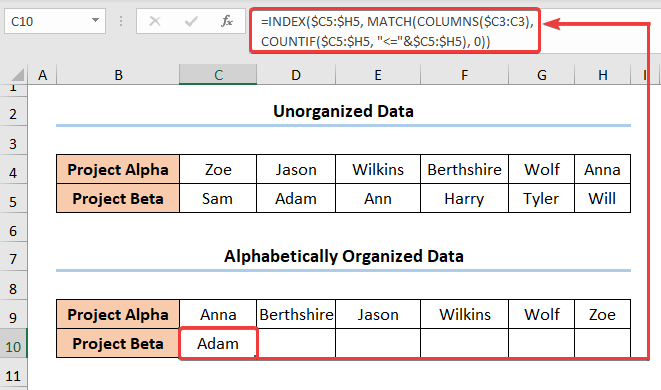 Eventually, we get the following results as shown in the picture below.

Our last method discusses how to arrange a column alphabetically by the last names of the people. This method combines the LEFT, RIGHT, and SEARCH functions to organize the names alphabetically.

Suppose we have the following dataset shown in B4:C13 cells. The table shows the Project name and the Full Name of the employees assigned to each Project respectively. 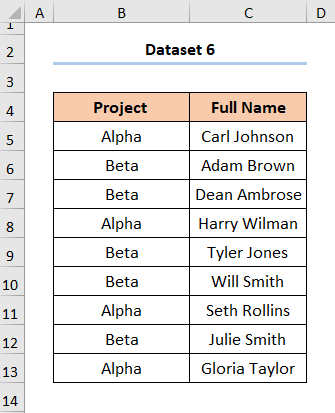 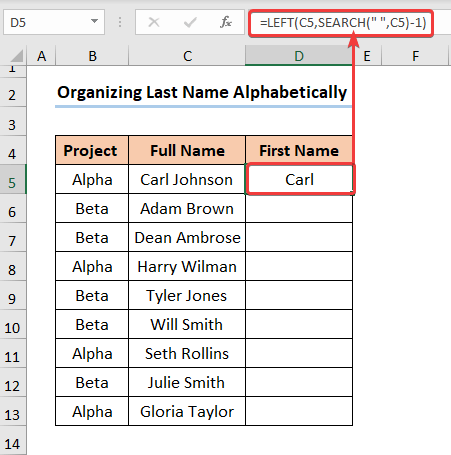 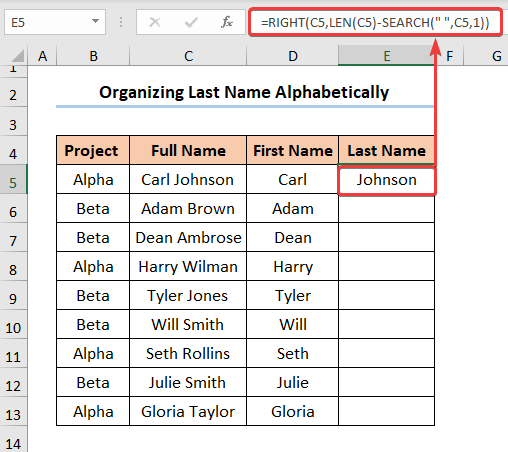 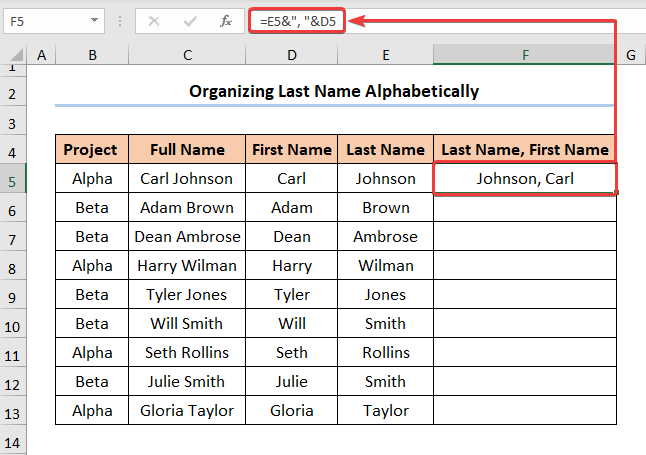 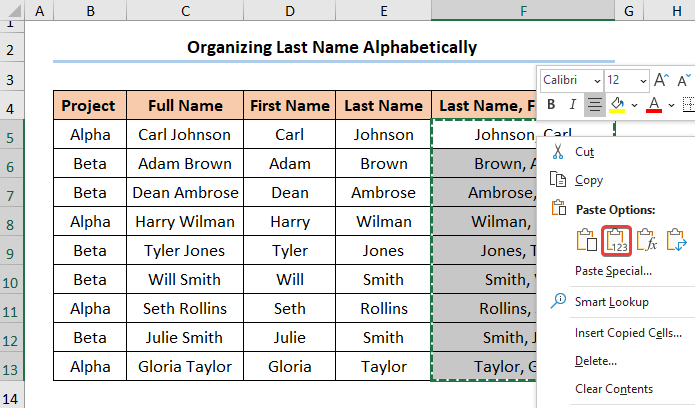 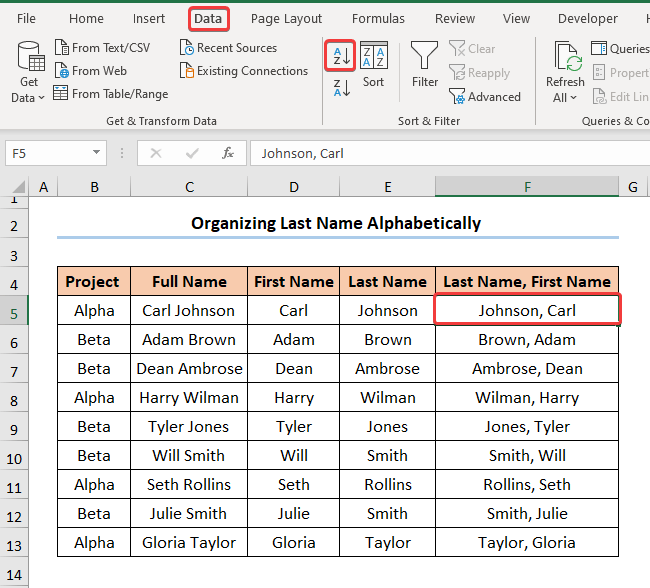 This concludes the process of arranging the groups in alphabetical order. 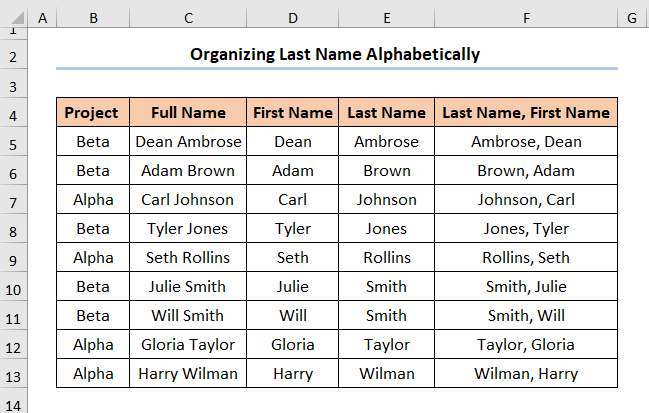 To conclude, I hope this article helped you understand how to organize things alphabetically in Excel. If you have any queries, please leave a comment below. Also, if you want to read more articles like this, you can visit our website ExcelDemy.

Hello! Welcome to my Profile. I completed my BSc. at Bangladesh University of Engineering & Technology from the Department of Naval Architecture & Marine Engineering. Currently, I am conducting research & posting articles related to Microsoft Excel. I am passionate about research & development and finding innovative solutions to problems.

How to Stop Calculating 8 Threads in Excel (14 Effective Ways)

[Fixed!] Excel Formulas Not Working on Another Computer (5 Solutions)