Suppose that we took 5 randomly selected salespeople and collected the information as shown in the below table.  Whether education or motivation has an impact on annual sales or not?

Here are the explanations for constants and coefficients:

Constant and β1, β2… βn can be calculated based on available sample data. After you get values of constant, β1, β2… βn, you can use them to make the predictions.

As for our problem, there are only two factors in which we have an interest. Therefore, the equation will be:

Excel offers us Data Analysis feature which can return values of constants and coefficients. But before using this feature, you need to download Analysis ToolPak. Here is how you can install it.

Now if you click on Data tab, you will see Data Analysis appears in the Analysis group (right panel).

Figure 2 [click on the image to get a full view]

Click on Data Analysis in the Analysis group on the Data tab. Select Regression In the prompted Data Analysis dialog box. You can also do other statistical analysis such as t-test, ANOVA, and so on. 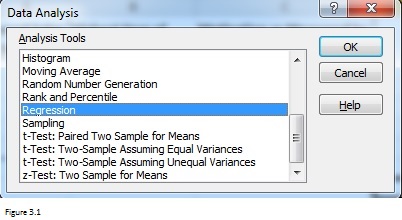 A Regression dialog box will be prompted after you select Regression. Fill the dialog box as shown in Figure 3.2.

Since range A1: C1 includes variable labels and therefore Labels check box should be selected. In fact, I recommend you to include labels every time when you fill Input Y Range and Input X Range. These labels are helpful when you review summary reports returned by Excel. 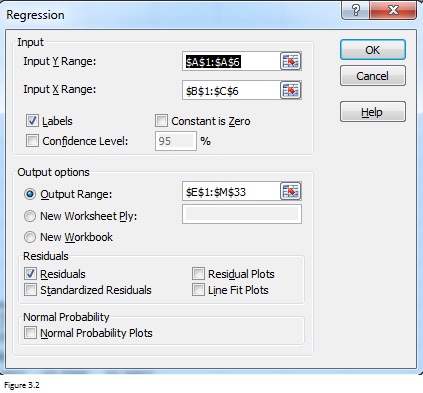 By selecting the Residuals check box, you can enable Excel to list residuals for each observation. Look at Figure 1, there are 5 observations in total and you will get 5 residuals. Residual is something that’s left when you subtract the predicted value from the observed value. Standardized residual is the residual divided by its standard deviation.

After you click on the Ok button, Excel will return a summary report as below. Cells highlighted in green and yellow are the most important part to which you should pay your attention. 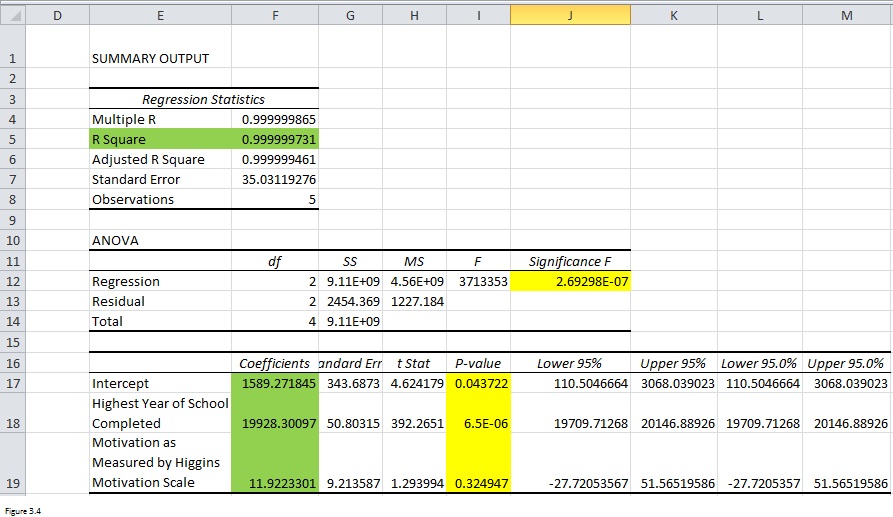 The higher R-square (cell F5), the tight relationship exists between dependent variables and independent variables. And coefficients (range F17: F19) in the third table returned you the values of constants and coefficients. The equation should be Annual sales = 1589.2 + 19928.3*(Highest Year of School Completed) + 11.9*(Motivation as Measured by Higgins Motivation Scale).

Read More: How to Calculate P Value in Linear Regression in Excel (3 Ways)

After deleting Motivation as the independent variable, I applied the same approach and did a simple regression analysis. You can see that all of the values are less than 0.05 now. The final equation should be:

Figure 3.5 [click on the image to get a full view] 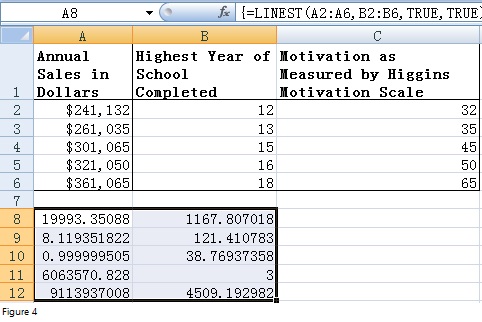 Besides Add-Ins tool, you can also use LINEST function to do multiple regression analysis. LINEST function is an array function that can return the result in either one cell or a range of cells. First of all, select range A8:B12 and then enter formula “=LINEST (A2:A6, B2:B6, TRUE, TRUE)” into the first cell of this range (A8). After you press CTRL + SHIFT +ENTER, Excel will return results as below. By comparing against Figure 3.4, you can see that 19993.3 is the coefficient of Highest year of school completed while 1167.8 is constant. Anyway, I recommend you to use Add-Ins tool. It is much easier.

How to Use Wildcards in Excel?

How to Clean Data in Excel (7 Effective Methods)