XIRR vs IRR – How to Calculate IRR and XIRR in Excel

The IRR (Internal Rate of Return) Function is used to calculate the internal rate of return for a series, of given periodic cash flows. These cash flows do not have to be even, though they should include the initial input investment and the subsequent values that denote the net income. The internal rate of return is utilized, in order to give an indication of the profitability of a potential investment.

The syntax of the IRR Excel function

The syntax of the XIRR Excel function

So, let’s get started with a simple example to illustrate what IRR and XIRR are used for, and the main difference between them.

XIRR vs IRR (Difference between IRR and XIRR)

How to Calculate IRR in Excel 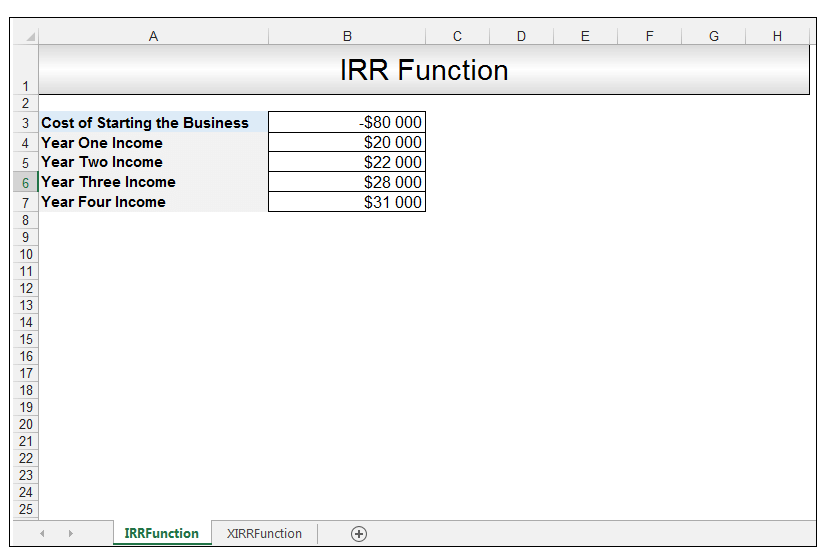 1) In order to calculate the IRR, in Cell B8 we input the following formula: 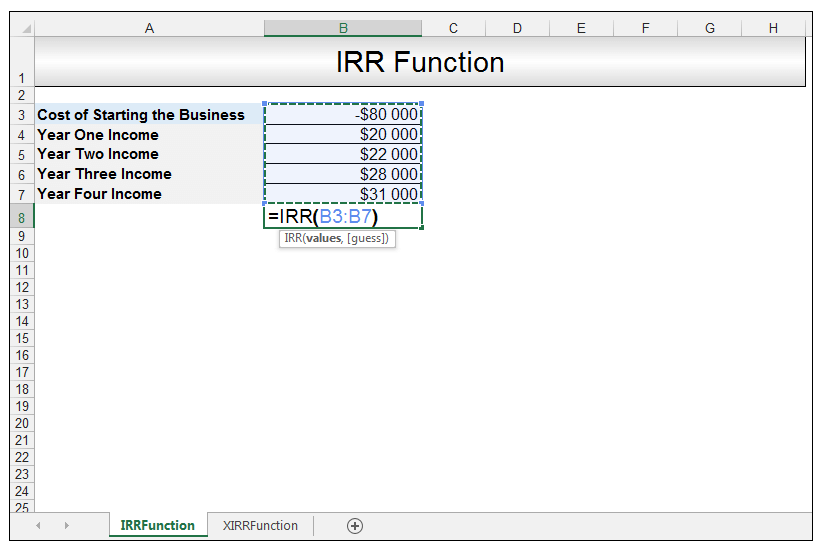 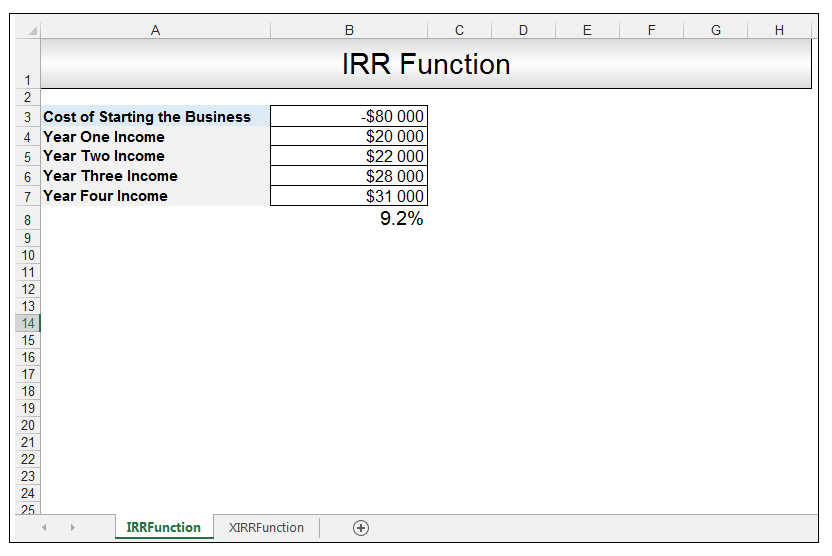 The IRR of a potential project can be utilized as a comparative benchmark value, if the IRR meets the criteria of being higher than a company’s required rate of return, the company proceeds with the commencement of the project. If not, the company does not proceed with the project. The IRR can also be utilized to compare the potential profitability of multiple prospective projects, and if the cost of investment is equal for all the projects, then the project with the highest IRR would be considered to be the most attractive for investment.

How to Calculate XIRR in Excel 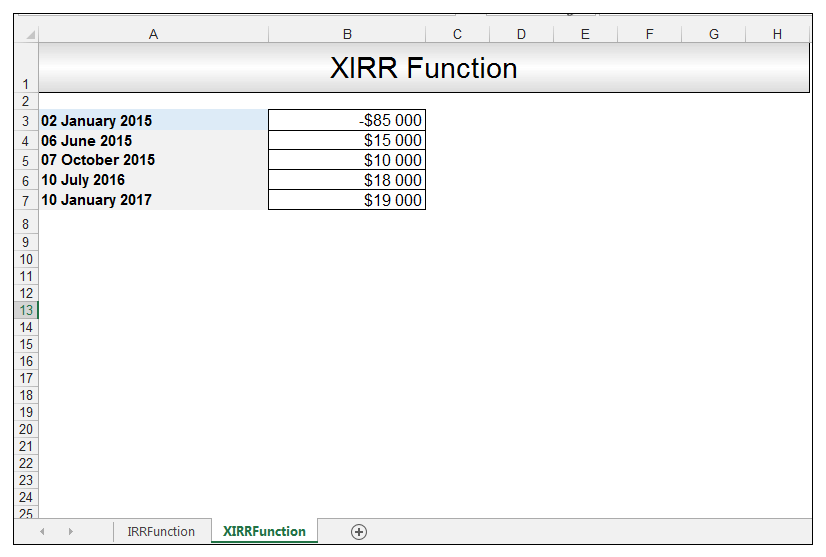 1) In order to calculate the XIRR, in Cell B8 we input the following formula: 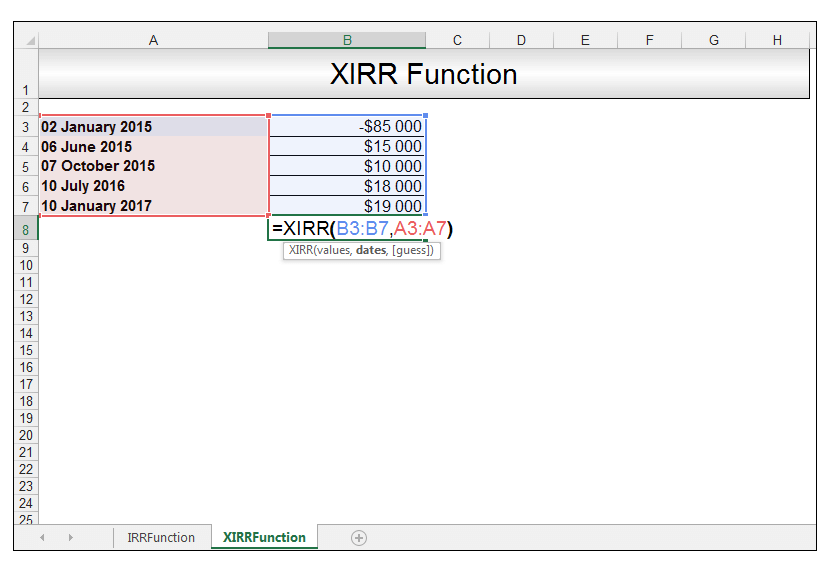 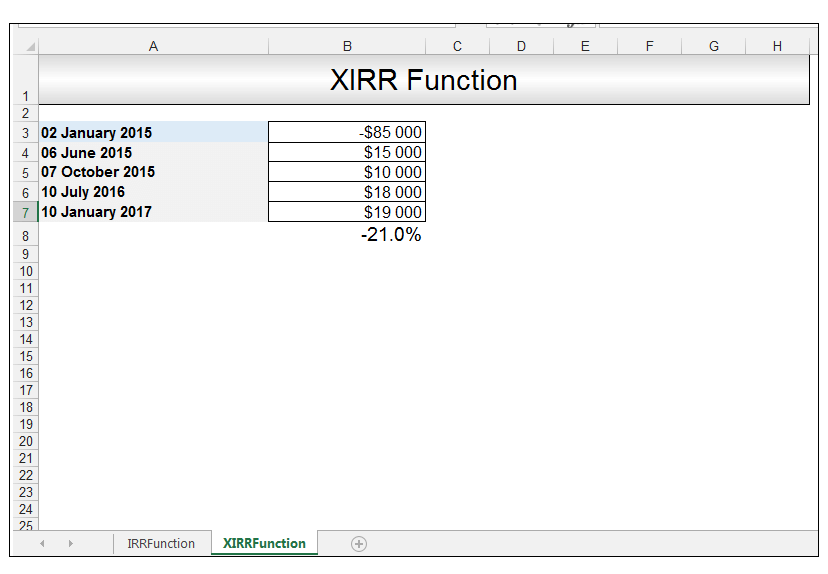 This indicates a potential lack of profitability, for the time periods given.

The main difference between the IRR and the XIRR Functions is that XIRR is utilized for irregular cash flows. Both give an indication of the potential profitability of a project or investment and can be utilized as a comparative benchmark. The IRR and XIRR Functions, like the NPV and XNPV, can be used as indicators of the attractiveness of a potential investment or project. The IRR and XIRR functions, however, rate attractiveness as a percentage versus an actual dollar amount (as in the case of the NPV and XNPV Functions)

Please feel free to comment and tell us what projects/investments, you use IRR and XIRR for.

Calculating the Rate an Investment Achieves Using the RRI Function

How to Calculate Variance in Excel

Taryn is a Microsoft Certified Professional, who has used Office Applications such as Excel and Access extensively, in her interdisciplinary academic career and work experience. She has a background in biochemistry, Geographical Information Systems (GIS) and biofuels. She enjoys showcasing the functionality of Excel in various disciplines. She has over ten years of experience using Excel and Access to create advanced integrated solutions.

Related Articles
We will be happy to hear your thoughts

How to calculate salary increase percentage in Excel [Free Template]

Excel formula to calculate hours worked and overtime [with template]