How to Generate Random Numbers in Excel (9 Unique Methods)

Random numbers are those numbers that are generated by a process in which the outcome is not predictable and in a defined interval/set, the values are uniformly distributed. Random numbers are used in statistical sampling, computer simulations, data encryption, lottery, and in the areas where unpredictable results are desired. In this article, we will see many processes on how to generate random numbers in excel. We will also see the procedures of generating letters, words, dates, and time also.

9 Ways You Can Generate Random Numbers in Excel

RAND function doesn`t have any arguments. You can enter the =RAND () function in any cell and copy/drag the formula to use it in other cells.

The following picture shows the basic use of the RAND function where many random numbers are generated. 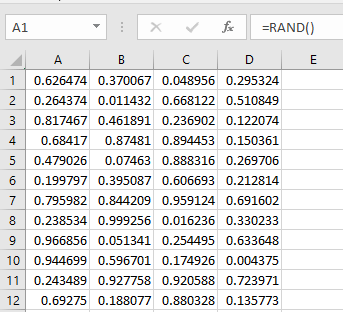 i. Uses of RAND function with a range

In this way, you can produce random numbers from 0 to N where N is the upper limit in this case. You just need to multiply the function RAND by N.

Let’s say we want to generate some random numbers from 0 to 25. We will multiply 25 with the RAND function. It will produce random numbers in a sequence that are greater than/equal to zero but less than 25. 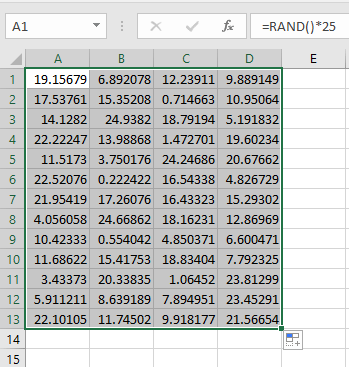 Note: In excel the upper limit is never included in the sequence of random numbers. If you want to generate numbers between 0 and 4 including 4, you need to specify the upper limit as 5.

The previous example shows us the random numbers which are between 0 and any value N. A question might arise that “How can we create random numbers between two values that don’t start with zero? Well, we can use a formula to execute that which is,

Where Y is the highest value and X is the lowest value in the range.

The following picture shows an example of generating arbitrary numbers between 100 and 50. 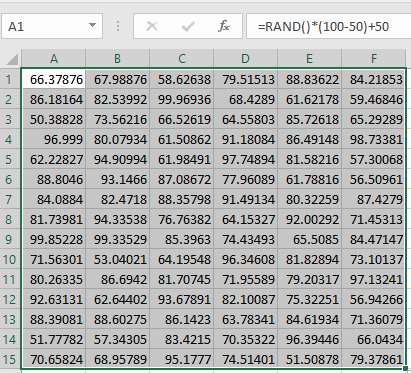 Note: This formula never returns a number that is the largest in a specific range.

To create random integer numbers in excel we can use the above two formulas wrapping in INT function.

For creating random integers which are between 0 & 25, we can use the formula 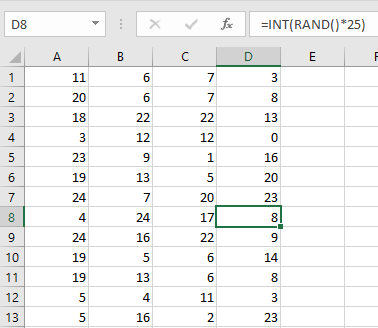 For creating arbitrary integers between 100 and 50, we can use the formula 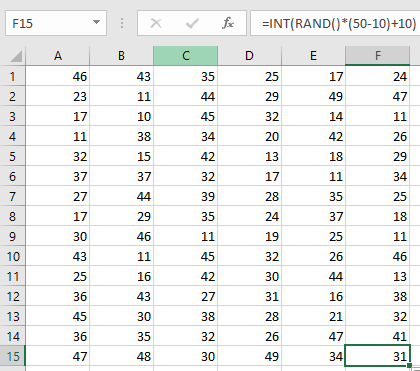 2. Use of RANDBETWEEN function

i. Generating random integer with RANDBETWEEN function in Excel

The following picture shows us the result of this example. 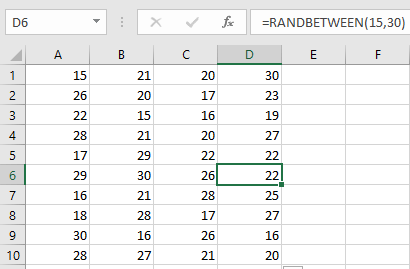 Let’s work with the previous example where we got random integer numbers from 15 to 30. Here instead of getting the integer numbers if we want to get the decimal numbers, the modification of the formula will be: 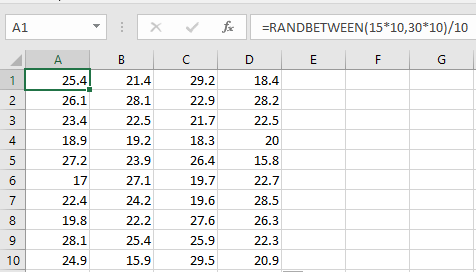 To produce random letters in excel a combination of three different functions are required. Let’s say we want to create random letters from A to Z. We will use the formula as stated below:

In the above formula:

Note: The above formula is case sensitive as the ANSI code is different for upper-case and lower-case characters.

Generating random names in Excel is so much interesting. You can literally play the lottery by doing it. In this example we will be using a column consists of 15 names. One name will be selected randomly from that column/ list. The formula for doing this is given below. 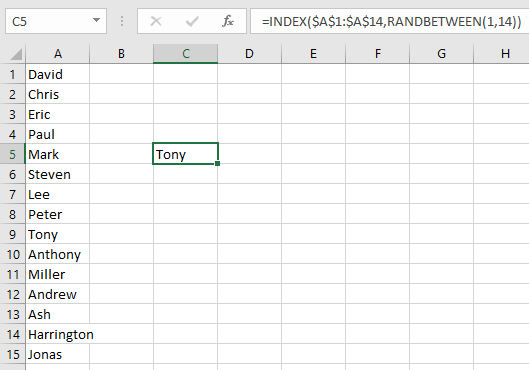 Here the given range is taken as $A$1: $A$14 from the 15 names in column A. From this range, we want to take a random name from the top 14 names. RANDBETWEEN (1,14) allows us to take random 14 names for the operation. The INDEX function allows returning a value from the given range. By dragging the formulated cell upward and downward we can copy the formula for whose cells. 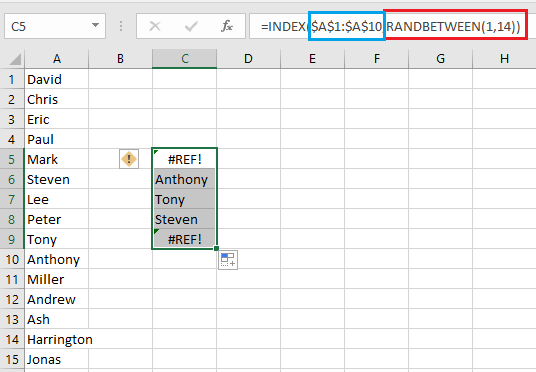 As you can see. The main name range is given as $A$1: $A$10 but the specified name range (1,14) from which the names will be generated are not in this range. So, it will ask for references as stated in the above picture.

To produce some arbitrary dates between two dates, we can use the RANDBETWEEN function with DATEVALUE. Here in this example, we generate some dates between 1st March 2018 to 17th March 2018. The Formula is given below.

Note: Sometimes the cells may not give you a date rather it will give you some random number. You need to format the cell in a specific date format to show dates in the cells.

The procedure of generating arbitrary times between two times is the same as above. The formula can be given as

Here in this example, we use,

The same thing can be written as,

Here in this case the formula will be,

Note: The TIMEVALUE function actually gives a valid time from a text string and TIME function gives time with hours, minutes, and seconds. If you again find a random number instead of time, format the cells with a specific time format.

To do this, we need to combine RANDBETWEEN, DATEVALUE, and TIMEVALUE functions together. Here we used the following formula to create dates and times together in a range.

8. Unique random number generator in Excel (with no duplicates/repeats)

Sorting a list of unique numbers in random order

In this method, we will create a list of numbers in serial order. Then again in another column, we will use the RAND function. The two columns, then, will be filtered and we will see that the 1st column where the numbers are in serial order will be distributed randomly. As the numbers that we provided are not repeated here, we will find a list of unique numbers in a column. 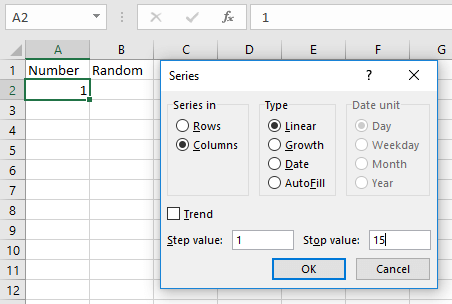 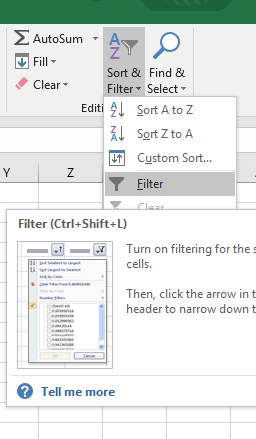 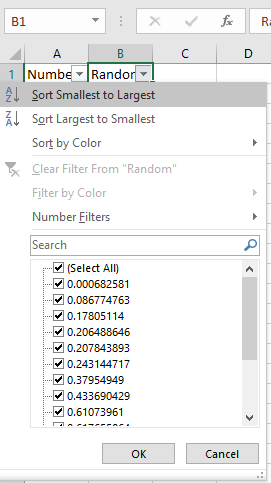 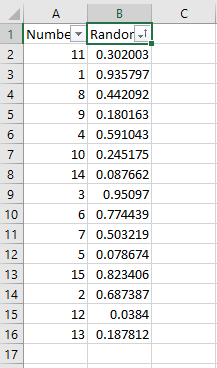 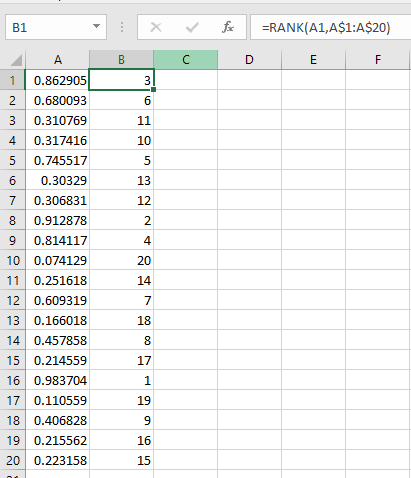 Using the largest values and the MATCH function

Note: You can use COLUMN instead of ROW. In that case, you have to drag the formulated cell on the right/left side. If you use ROW in the formula and drag it to left/right it will produce the same numbers.

Using the RAND and INDEX function 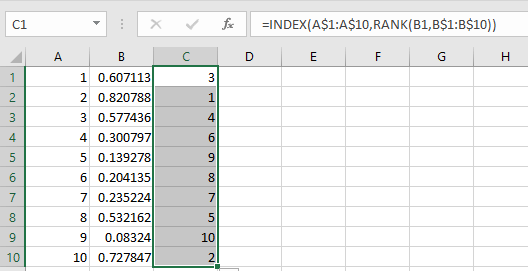 Generating unique random numbers is more efficient in VBA code than using different functions of excel. In excel, there are so many VBA codes available to generate numbers that can be unique or repeated. In this example, I generate 10 arbitrary numbers using VBA code.

The code that I used here was collected from http://access-excel.tips/generate-non-duplicated-random-number/ this link.

I found it very useful, short, and effective among all the codes that I found while doing the task.

The code is given below.

<code>    For Each rng1 In randomrange

<code>    For Each Rng In randomrange

You will see that 10 numbers from 1-10 appear in column A. You can modify it by just changing the upper bound, lower bound, and range. The below picture shows the result of the above code. 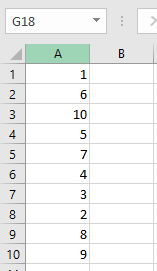 I hope this article may help you. Please feel free to comment.

How to Repeat Header Row When Scrolling in Excel (6 Ways)

Excel If Cell Color Is Green Then Show or Customize Outputs