How to Create Combination Charts with a Secondary Axis in Excel

When you have more than one data series that you want to plot on the same chart, you can create a combination chart in order to deliver a visual representation of each of the data series. Using this format, you can easily choose the type of chart, best suited to the respective data series.

There are four main types of tennis serves, namely the flat serve, the slice serve, the topspin serve and the kick serve.

The flat serve requires the most strength out of the four. It is the most common serve, utilized by tennis players and the easiest to learn. There is no spinning of the actual ball involved. The flat serve has the distinct advantage of being the easiest of the serve types to learn and the opposing player is not left with much time to react. The disadvantage associated with this type of serve is that it is harder for the ball to get over the net without a spin, and if the opposing player does manage to return the serve, it will come back stronger.

The kick serve is for more technically advanced players than the flat serve. It involves a combination of tennis techniques. The tennis player is required to combine a top spin and a side spin, with an aggressive swing and high racket head speed. The kick serve is the hardest to learn but it has the advantage of also being the hardest of the serves, for the opposing player to return.

The topspin serve is similar to a flat serve but the player is required to ensure, the ball bounces high. It is the most consistent and predictable of the four serves and allows a player to regain control of fluctuations. It has the disadvantage of being easy to see and thus easy for the opposing player to return. It allows for control and accuracy in positioning.

A slice serve is also similar to a flat serve, however, the way the tennis ball is hit differs. This serve does not require as much power as the flat serve and can result in the ball either moving to the outside of the tennis court or towards the opposing player’s body. It is a good serve when one wants to keep the opposing tennis player guessing, but it has a high chance of hitting the net, if not delivered properly.

An ace in tennis refers to a serve that is not touched by the opposing player, thus yielding additional points for the player that delivered the serve.

A hypothetical head coach running a tennis clinic would like to see the number of flat serves recorded for each month, on a chart as well as the % of flat serves that turned out to be aces.

An image of the source data is shown below: 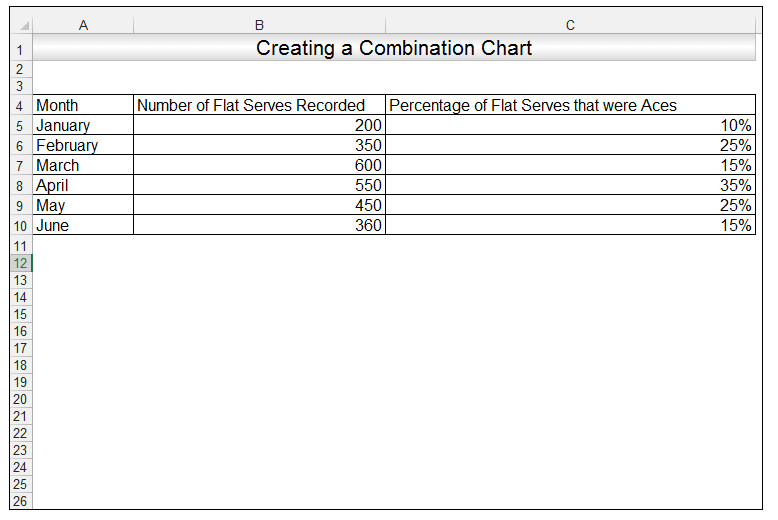 1) In order to create a combination dual-axis chart, firstly select the data as shown below. 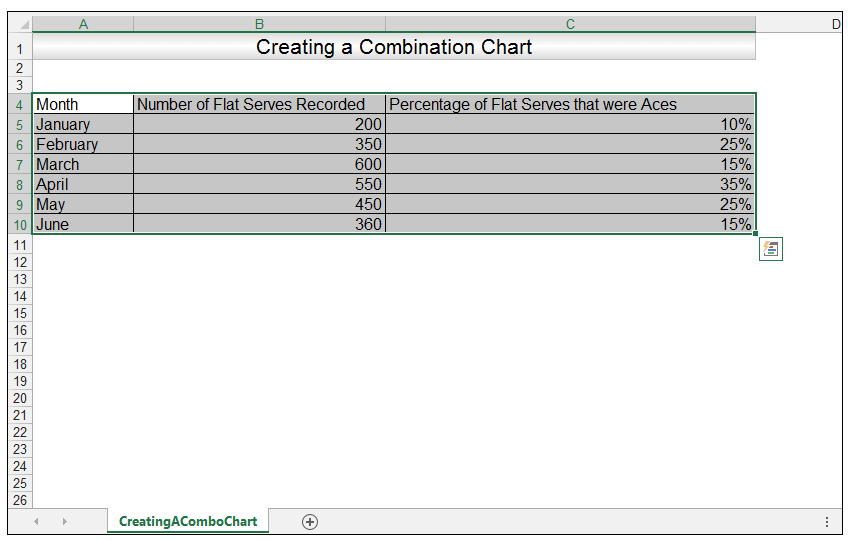 3) Click on the drop-down arrow and choose Clustered Column – Line on Secondary Axis. 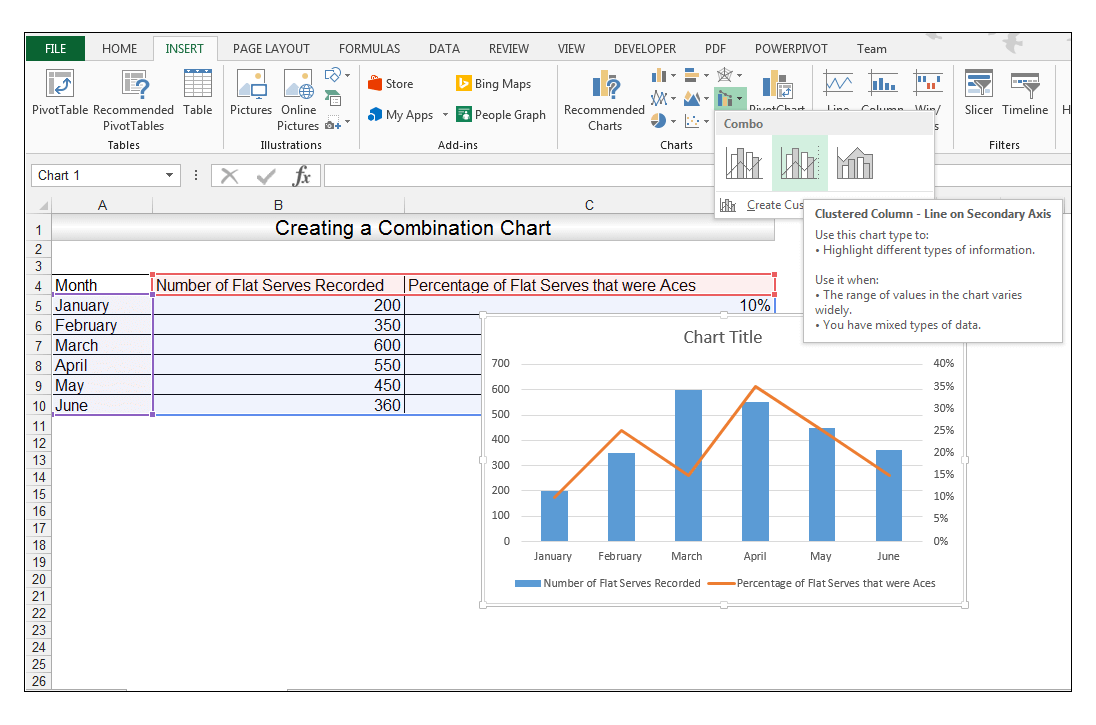 4) Format the chart by adding a title, choosing a style, removing the grid lines, and increasing the font size as shown below.

5) Add and format data labels if needed, in order to provide further clarity and differentiate between the two series, as shown below.

There are a few best practices to consider when creating combination charts with a dual-axis. They are useful when the different data series have vastly differing scales. As in the above example, we had a percentage and a quantitative number series, so it was best to plot these two series on a different axis.

Dual-axis, combination charts are useful for showcasing two different data series with different scales, on the same chart. There are certain best practices to follow, however when creating these charts, in order to not create confusion and actually convey meaning.

Please feel free to comment and tell us about your views on the different tennis serves as well as combination dual-axis charts.

How to Create Speedometer Chart in Excel (with Easy Steps)

How to Create Speedometer Chart with Two Needles in Excel

What Is a Radar Chart in Excel? (with Chart Types & Formation)

How to Make a Forest Plot in Excel (2 Suitable Examples)