If you are looking for some of the easiest ways to count a number of characters in a cell in Excel then you are in the right place. Sometimes it may become necessary to count the character number in a cell but it becomes tedious and ineffective in doing it manually. So, let’s get into the article to know the ways of making this task easier.

Count Number of Characters in a Cell.xlsm 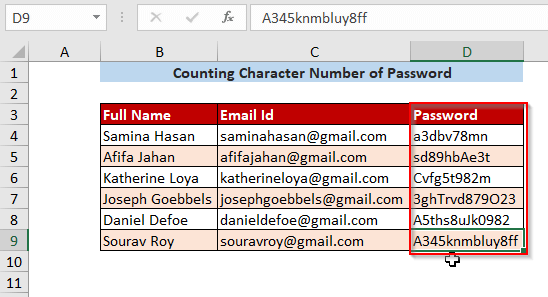 Step-01: To count the number of characters in a cell you will need to use the LEN Function here. 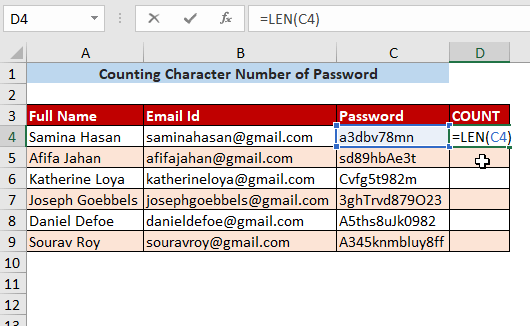 Step-02: After pressing ENTER and dragging it down the following results will appear. 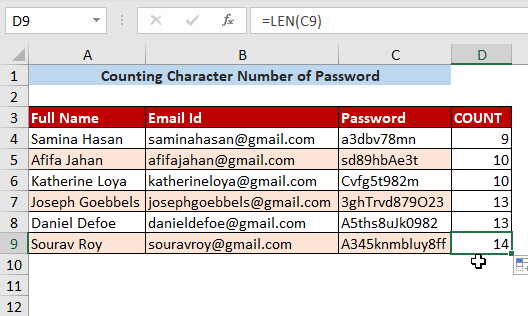 Method-2: Counting SUM of All Characters in a Range

Step-01: To find the sum of all characters in a range you have to use the LEN function within the SUM function.

Here, C4:C9 is the range of characters. 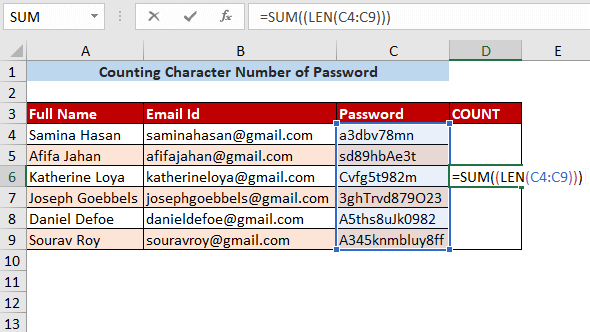 Step-02: After pressing ENTER you will have the Sum of the characters in the range you wanted. 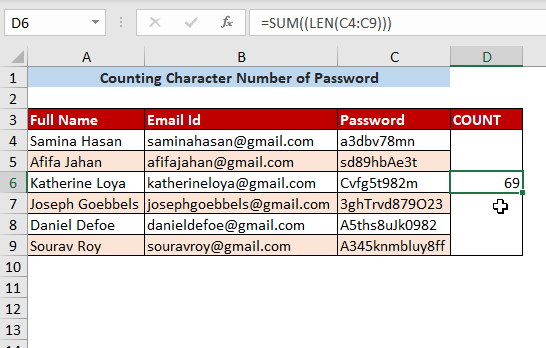 Method-3: Counting Numbers in a Cell

Step-01: If you want to count how many numbers have been used in a text (i.g. password) then type the following formula.

Step-02: After pressing ENTER and dragging it down you will get the total number of numerical values in a cell. Read More: Count Numbers in a Cell in Excel (3 Methods)

Method-4: Counting Characters in a Cell Except for Numbers

Step-01: If you want to count the characters in a cell except for numbers then you have to subtract the total character number in a cell from the number of numerical values in a cell(which we got in Method-3). Step-02: After that, you have to press ENTER and drag it down and then the number of characters except numbers will appear. 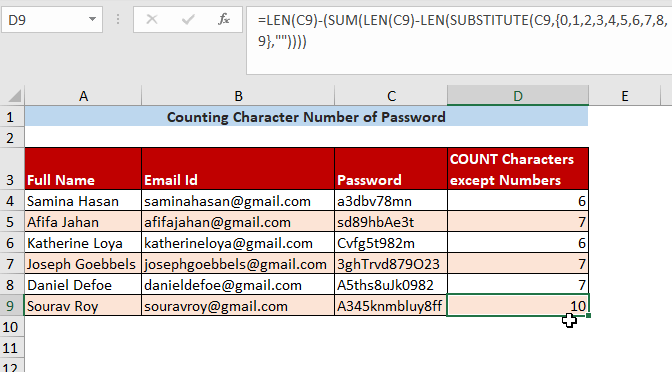 Read More: Count the Number of Specific Characters in a Cell in Excel (2 Approaches)

Step-01: If you want to count any special character in a cell then use the following formula.

Here, the text is C4, the old text is “a” and the new text is Blank 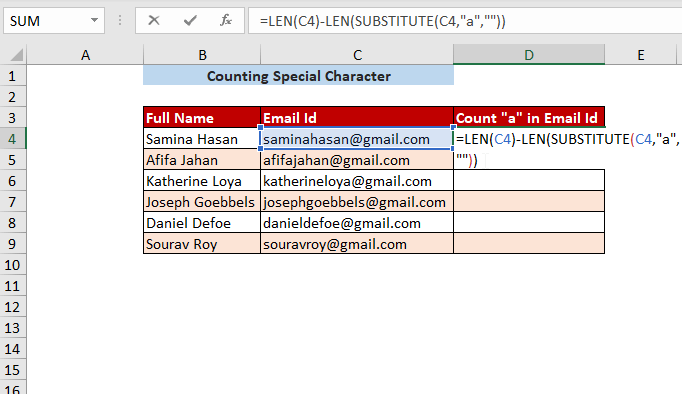 Step-02: After pressing ENTER and dragging it down you will get the following result. 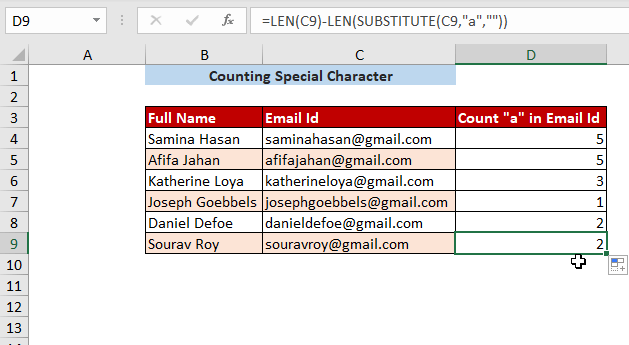 Step-01: At first you have to follow Developer Tab>>Visual Basic 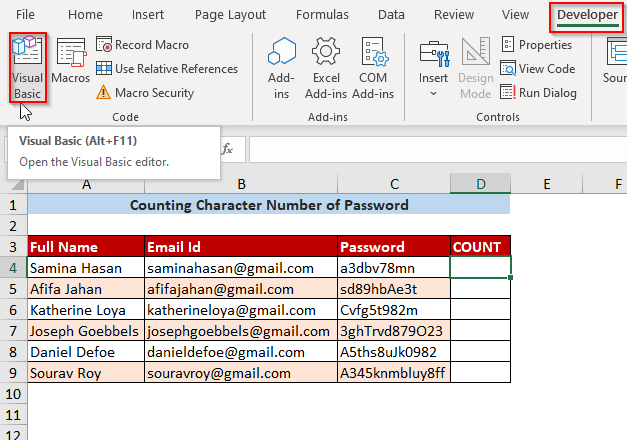 Step-02: Then Visual Basic Editor will appear and then go to Insert >>Module. 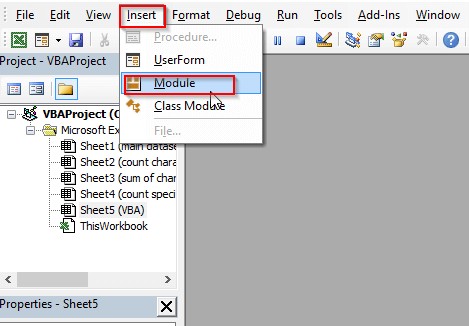 Step-03: Then Module 1 will be created and here you will write the following code.

After writing this code, Save this code and Close the window.

Here, a function named CharacterNo will be created and you can change the name as per your wish. 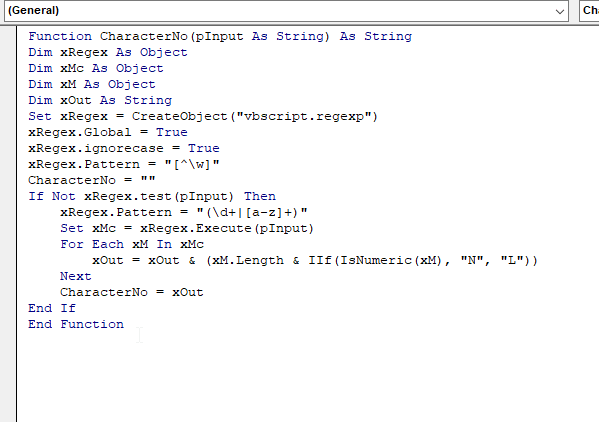 Step-04: Then in Cell D4 write the function CharacterNo and insert the text in C4. 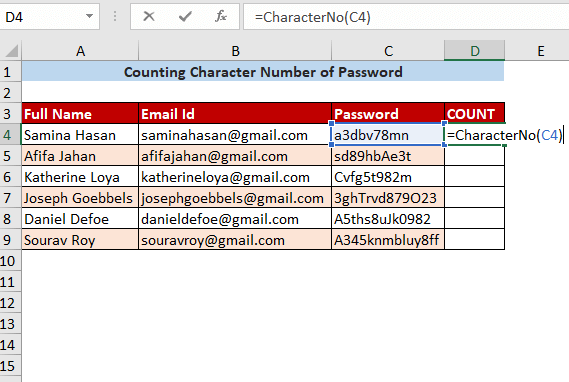 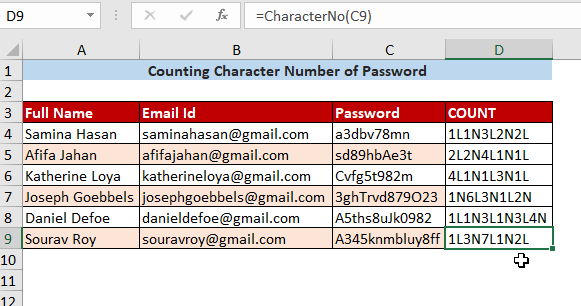 In this article, I tried to cover up the easiest ways to count the number of characters in a cell. Hope this article will help you regarding this topic. If you have any further suggestions feel free to share them with us. Thank you.

Hello everyone, This is Tanjima Hossain. I have completed my graduation from BUET. Then I have started working as a technical writer in SOFTEKO. I have grown interest in technical content writing, research topics, numerical analysis related field and so I am here. Besides this I love to interact with different people and I love to spend my spare time by reading, gardening ,cooking etc.

Difference Between AVERAGEIF and AVERAGEIFS

How to Create Actual Vs Budget Variance Reports in Excel

How to Convert Dollar into Rupees in Excel (2 Easy Methods)