How to Compare Two Columns Using VLOOKUP Function in Excel

There are a lot of ways to compare two lists or columns in Excel. In this article, I am going to compare/find matches in two columns in excel using VLOOKUP. In one of my previous articles, I discussed How to Compare Two Columns or Lists in Excel where I discussed other methods of comparison.

Before starting the comparison, I will discuss the syntax, arguments, and other necessary things about the VLOOKUP function.

An Overview of Excel VLOOKUP Function

The V in VLOOKUP stands for “vertical”. VLOOKUP. The VLOOKUP is a built-in function of Excel which performs the vertical lookup by searching a specific value of a column in another column.

VLOOKUP( lookup_value, table_array, col_index_number, [range_lookup] ). The arguments which are stated in this syntax have a specific meaning.

1. Using Only VLOOKUP Function for Comparison Between Two Columns

Let`s say you have two columns where some colors are listed. I am going to compare these two columns for exact matches. Like, If I choose the color Blue from the 1st column and lookup for this color in the 3rd column it will start looking up for the blue color and if this color doesn’t exist then it will return the value #N/A. So, let`s start the comparison. The color lists are listed below and in the Existence column, the comparison will be shown. 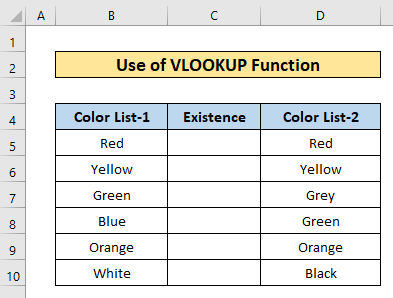 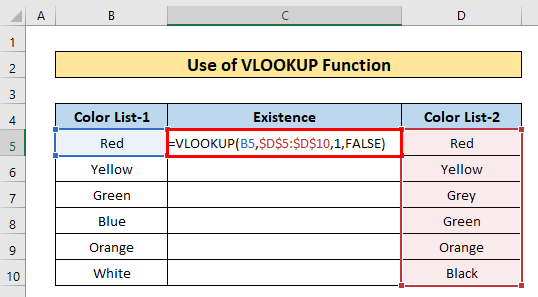 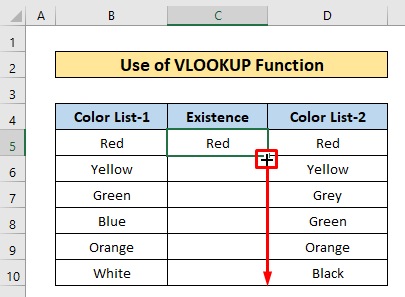 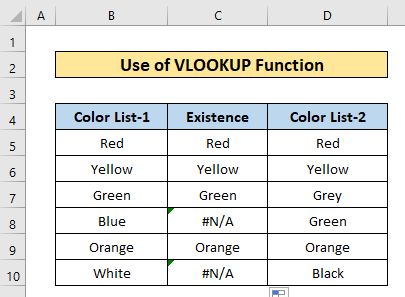 The #N/A results are found because the color Blue and White are not in the Color List-2.

Note: We specify the range as $D$5:$D$10. The “$” is used to make the cells absolute and constant in a formula. So, whenever you copy the formula for other cells it will use the same range.

2. Using IF, ISNA, and VLOOKUP for Comparison Between Two Columns

Here I will be using the same example. But I will insert two new functions with the VLOOKUP function. If there is no exact match between the columns the formula will return NO. If matches exist the formula will return YES with respect to the first column. The color lists are listed below and, in the Color Exists column, the comparison will be shown. 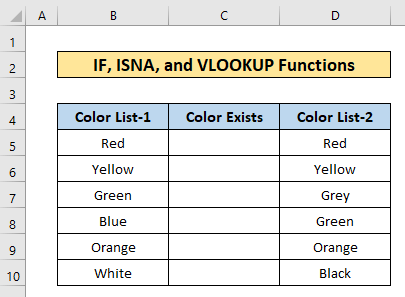 The VLOOKUP function will return the output for the lookup value.

Next, the ISNA function will return TRUE if it gets #N/A error otherwise will return FALSE.

Finally, the IF function will return NO for TRUE and YES for FALSE. 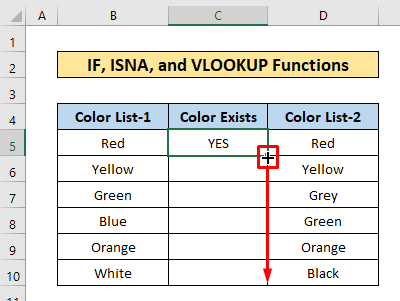 A few moments later, you will get all the output like the image below. 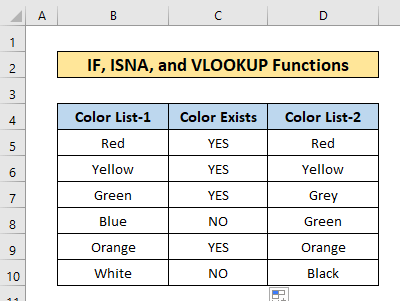 Read More: How to Use IF ISNA Function with VLOOKUP in Excel (3 Examples)

In this example, we will compare two columns of two different Excel sheets using VLOOKUP. The formula will be similar except in the Table_array argument there will be an addition of the worksheet name. Let`s say we have two lists of colors in two different worksheets. The worksheets’ name is defined as CL-1 and CL-2. We will compare the Color List-1 of CL-1 worksheet with Color List 2 of the CL-2 worksheet. The two lists from the two worksheets are given below. It’s the List-1. 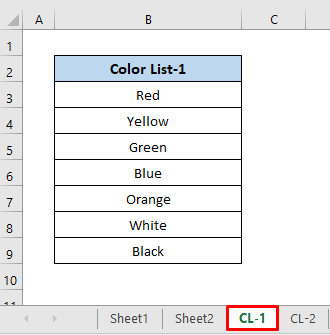 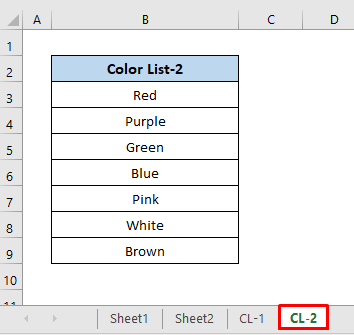 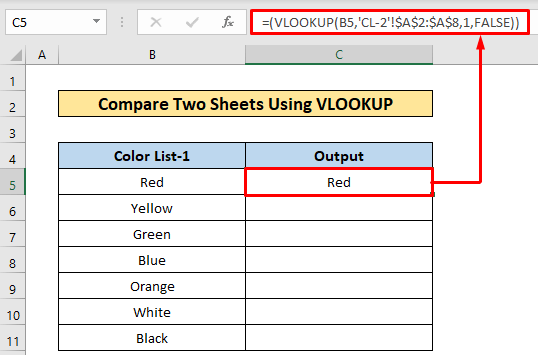 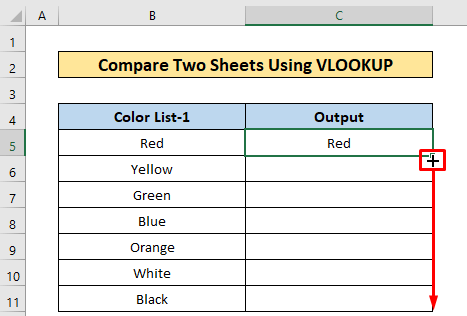 After a while, all the output will appear. 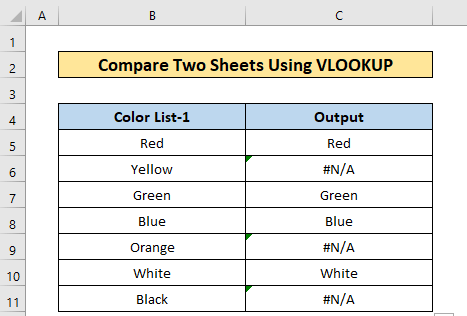 Here the color Yellow, Orange, and Black don’t appear in CL-2 worksheet. That’s why we get the rest #N/A in CL-1 worksheet.

We often need to use the VLOOKUP function for returning a third value by comparing two columns. In this section, we’ll learn how to do that in an easy way. To do it, we modified the dataset, connected some sizes with the colors, and added another column where we placed three colors. Now we’ll compare the color columns and return the size in the output column. 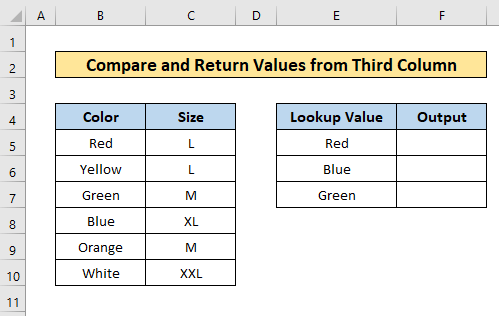 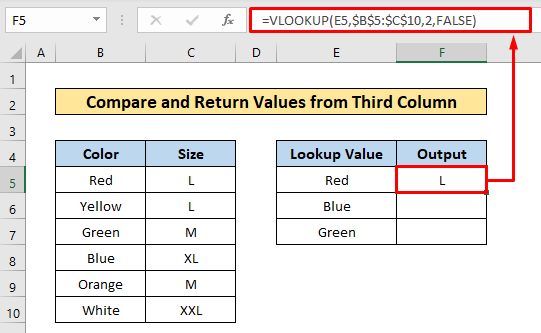 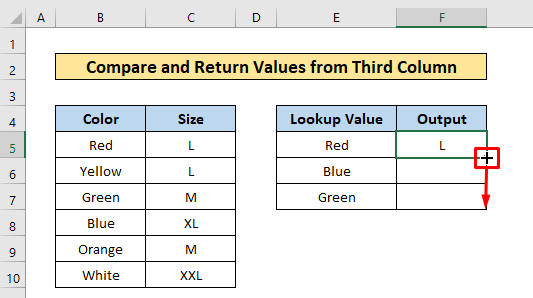 Here are all the third values after comparing. 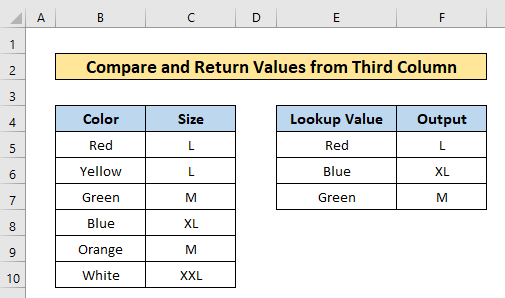 That’s all for the article. I hope the procedures described above will be good enough to compare/find matches in two columns in Excel using the VLOOKUP function. Feel free to ask any questions in the comment section and give me feedback. Visit the site to explore more.